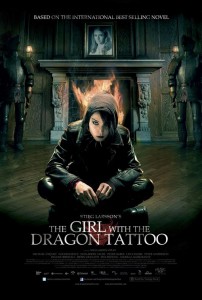 This Swedish adaptation of The Girl with the Dragon Tattoo is an affective crime thriller that works well enough as a film but has some question marks as an adaptation.

Mikael Blomkvist is a minor celebrity reporter who’s image and magazine, Millennium, is dragged through the mud when he is sued and convicted of libel against a prominent industrialist whom he exposed for being involved in much illegal activity.  Mikael doesn’t try to defend himself and privately shares that he was set up though he has real dirt on the industrialist that he just needs a bit stronger evidence on.  Following Blomkvist’s case is a private detective, hacker Lisbeth Salander, who was hired to report on Mikael by another industrialist, Henrik Vanger, who recruits Mikael to research and make one last attempt to solve a long time family mystery; the disappearance/murder of sixteen year old Harriet in the 60’s.  Mikael agrees to the job but Lisbeth covertly stays on the case by cloning Mikael’s HD and following his every move in his research.

Now if you haven’t read the book the next paragraph won’t mean as much to you unless you are interested in what they could have done to the story had they not diverted the way they did.  All the big twists and turns are still here but the plot has been greatly simplified for the films sake; which is understandable.  The eliminate/kill off a number of characters and marginalize even more and I think this was a bit of a mistake as they really narrowed down the potential suspects to 3-4 characters by moving most of the Vanger family off the Island.  Though these choices were made to not confuse the audience as much, I think the over abundance of suspects made for a naturally confusing and daunting case.  The film also doesn’t spend as much time with the Vanger’s as you would hope and you are left really never feeling a connection with any of these characters.  Instead the focus is almost entirely on Salander and Mikael and their murder mystery and while that works for the film for simplicity’s sake I feel like we lost some intrigue.

Now the film does do a fine job at evening out the time spent with Mikael vs. Salander as Salander is by far the most interesting character in the film, but Mikael is given a lot of life by Michael Nyqvist who effectively captures the characters charm which the adapters effectively use.  I do wish there was more of a threat involved as the pair gets closer and closer to the killer but it is regulated to one instance of a threat and the mystery comes to head rather quickly once they close in.

Technically the film is rather well made and well paced for a two plus hour film and doesn’t hold back on the brutality that does show up from time to time.  In fact I have to tip my hat to the filmmakers for having the balls to make one of the most affecting scenes in the book just as tough to endure on the screen (you will know what scene I mean when you see it).  The film does also make the investigation a tad too easy if you ask me, but maybe that was just because it was fresh in my mind; though it felt as there were fewer developments to discovering the end game.

The actors in the film are all rather peripheral outside the two leads and don’t do a whole lot that makes them anything special or worth writing home about.  This is quite a shame too if you ask me as the Vanger family is full of interesting characters.  Luckily the two leads do a great job, especially the aforementioned Michael Nyqvist who elevated a potential not terribly interesting character in Mikael.  Though the character himself is marginalized of one of his most fun qualities, the womanizing, but oh well.  They nailed the role of Salander with casting Noomi Rapace who captures the physical and emotional spirit of the character.  The character is written a tad different in the film but she does a great job selling the darker and odd sides of the character.

In the end, The Girl with the Dragon Tattoo is a solid crime thriller that leaves a bit to be desired if you are a fan of the novel.  I can’t wait to see what David Fincher does with this trilogy, this is the first of a possible three books to be adapted, in a few years but as this stands it is a solid treatment of the novel.  Elevating Mikael and capturing all the greatness of Salander the film works as an interesting character piece but might have marginalized everyone just a bit.  The plot will keep you guessing and wrap you up in the engaging mystery but I wonder if the film shows its hand a bit too much; will have to talk to someone who hasn’t read the book to determine that.  Either way, the film is well worth your time as is Stieg Larsson’s excellent first novel in the Millennium trilogy.

The Girl with the Dragon Tattoo is a B