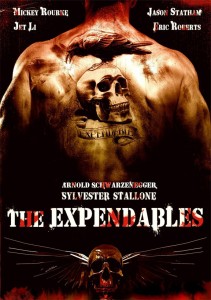 Kevin was recently telling me how there are no great action flicks any more. You know, like leave your mind at the door action era during the 80s which produced Rambo, Die Hard, etc. These days it seems that those type of films have been dumbed down even further, and have started starring people like John Cena (usually his films result in him jumping out of a fire). It seems there might be a remedy for Kevin’s woes as we get more information on The Expendables. This latest trailer features just about any action star of note over the past 30 years. It might be just a silly gimmick, but it also might have a huge payoff that results in a lot fun, and a hearty amount of nostalgia.

A group of mercenaries is hired to infiltrate a South American country and overthrow its ruthless dictator. Once the mission begins, the men realize things aren’t quite as they appear, finding themselves caught in a dangerous web of deceit and betrayal. With their mission thwarted and an innocent life in danger, the men struggle with an even tougher challenge — one that threatens to destroy this band of brothers.