Wrapping up the 2010 preview is relief pitching. Since there’s an abundance of pitchers in the bullpen, I’m just gonna highlight some of the guys who stand out more than the others.

The man known only as Beard is an intriguing Dave Duncan project. Formerly a starter, Dunc switched roles for Franklin and Braden Looper (originally a closer), and the results have been rather positive for the Cardinals. Franklin dominated for five of the six months last season before he wore down in September. He is known mostly for his command and for the small children he hides under his chin. 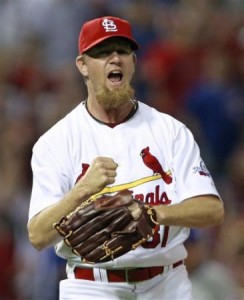 Franklin isn’t the typical fireball-throwing closer, relying instead on movement and control. Just ask his wife. He took over the role after the first game of the season last year and never relinquished control. He signed a contract extension with the Cardinals last year, so he’ll be around for a couple more years, most likely to mentor Jason Motte now that Chris Perez is in Cleveland.

Presumably one of the candidates to take the role of closer once Franklin is gone, Motte fits the typical power pitcher mold usually desired in a closer. His fastball is typically in the 97-98 MPH range, but he still needs work on his secondary pitches. Motte was originally as a catcher (watch his throwing motion) and official lumberjack. 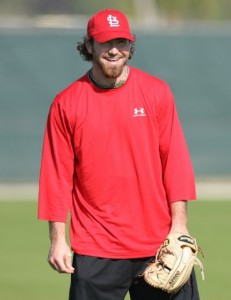 At least he's a happy lumberjack.

Seriously. Apparently the Cardinals only employ bearded pitchers in the bullpen.

At least this guy shaves, right? 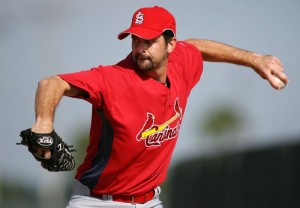 Miller was signed from Tampa Bay, presumably with the money the Cardinals save on shaving cream. One of the elders in the bullpen, Miller has been a remarkably consistent presence for the Cardinals, and one of LaRussa’s favorite weapons against lefties.

The rest of the bullpen is solid, if not spectacular. As noted, Kyle McClellan will be the long reliever. Dennys Reyes takes the mantle of fat lefty reliever from Ray King (Reyes is even Spanish for “kings”). Blake Hawksworth showed promise last year but has been slowed by a groin injury this spring.

Well, that’s about it for now. The Cardinals are in Minnesota right now preparing to help christen the Twins’ new ballpark with two exhibition games before starting the regular season Monday. Have a terrific weekend.