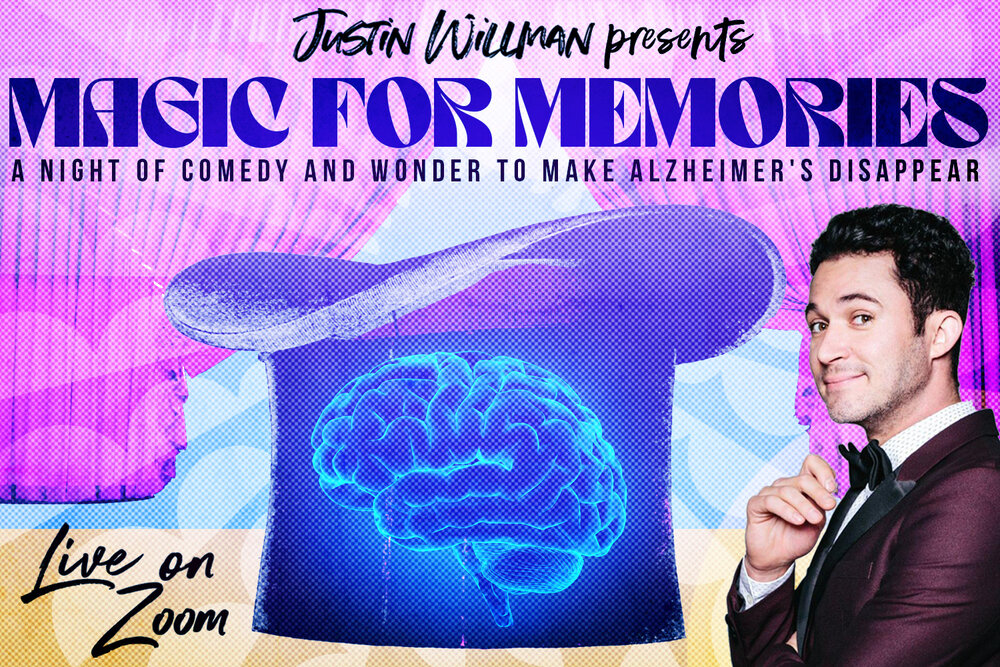 Comedian Justin Willman has a lot of tricks up his sleeve.

Whether it be his Netflix show, Magic for Humans, his Zoom specials at home, or his upcoming night of comedy called Magic for Memories, Willman will not be disappearing from the scene anytime soon.

The Ladue High School graduate took some time from his busy schedule to talk to Reviewstl.com about everything going on in his world of magic.

On Saturday, June 26th, Willman will host Magic for Memories, A Night of Comedy and Wonder to Make Alzheimer’s Disappear. Joining Willman on the show, which will be held live on Zoom, will be musician Jason Mraz, comedian Jim Gaffigan, along with Nicole Byer, Sara Bareilles and Weird Al, along with much more.

Willman talked about how the show came to be.

“It’s kind of culmination of things,” Willman said. “Last May of 2020, my mom passed away. She had been battling Alzheimer’s for a decade. It sent me into a grief-filled place.”

Willman said that as a performer, he knew he had to find a way to perform as an outlet during the pandemic.

“It was kind of self-therapy,” he said. “I had to come up with a way to express myself, so I started doing this show on Zoom. I kind of created this show called Magic for Humans from Home. Huge numbers of people from all over the world were signing up to watch.”

Over the course of a six-month period, Willman said over 1 million people attended a show. Willman was able to creat five, one-hour shows over that time.

“It was so fulfilling to connect with people,” Willman said. “It really kind of helped me heal.”

Willman said that after posting a piece about his mother during a show, it seemed to connect with a lot of people.

Creating a Zoom show was just what the doctor ordered for Willman. It was a way to raise money to fight Alzheimer’s and hopefully find a cure.

“I finally get the chance to call in favors to celebrities and comedians that I’m a huge fan of,” Willman said. “It’s going to be a Zoom virtual, variety show, packed with magic to interact with people. Every single penny raised will go toward my mom’s Alzheimer’s research foundation.”

Willman said St. Louis is one of the leading Alzheimer’s research area’s in the country.

“The BJC foundation is on the cutting edge of research,” he said. “I feel like we can make this disappear in our lifetime. It’s been amazing with the response. I feel good about creating an event that is fun, yet light, for people to enjoy.

Willman said the evening will be a chance for people to just have a good time, just like his Zoom shows have been during the pandemic.

“You watch a movie or go to a show to just forget about your worries for a little while,” he said. “It really is a two-way street for the performer as well. It’s my way of healing and providing escapism to fans.”

Willman, who also hosted Cupcake Wars on the Food Network, said he hopes to make this event a regular thing and even hold it in person in the future.

“Not only is this a way for me to give back to my town and community that I loved so much over the years, but it’s a way to raise money for an important cause,” he said. “It feels like a great way to honor my mom.”

Magic for Memories will start at 7 p.m. on Saturday, June 26. Tickets for the event are available in three different packages. The silver package is $40 and allows a family to have a private link to log in and view the show. The gold package is $150, and in addition to the viewing link for your household, you will also receive an invitation to the exclusive VIP post-show Q&A/discussion with Justin Willman and other stars from the show. Plus, as a token of our thanks, Justin will sign and personalize a limited edition 18″x24″ Magic for Memories poster print that will be shipped to your door following the event. And the platinum package is $1,000. That package allows you and your family to be invited to personally participate in a special piece of magic as a part of the show. In addition, Justin can dedicate this moment in the evening to an ALZ-impacted loved one in your life if you so choose. You will also receive access to an additional 10 private viewing links to share with friends or family so you can all enjoy the evening together. Plus you’re invited to join the exclusive post-show meet and greet with Justin and you’ll receive a signed and personalized 18″x24″ limited edition poster print to commemorate the evening.

Willman said that his fans have been supportive and understanding when hearing about his loss.

“It’s the sixth leading cause of death in the U.S, ” he said. “So many people have reached out that felt the way I felt. People want you to know what they have had to deal with. I hope we can bring about the change similar to the ice bucket challenge and ALS.”

For those who would like to see Willman live and in person, he said he is hoping to get back out on the road very soon.

“I’m going to be back in January,” he said. “I’m going announce a new tour with make-up dates and some new dates. It will be called Magic for Humans in Person.”

For fans who would like to purchase tickets or find out more about Magic for Memories, visit Magicformemories.com for more information.