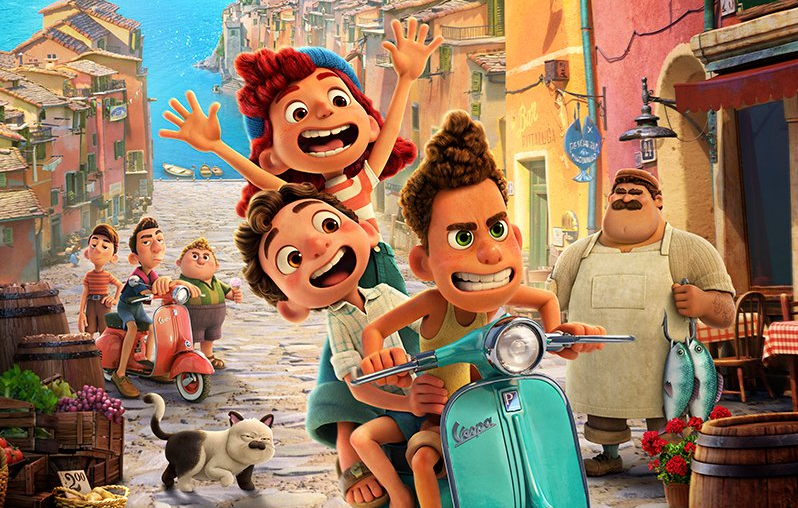 If you’ve ever wondered what it would be like if someone combined The Little Mermaid and Luca Guadagnino’s 2017 film Call Me By Your Name, look no further.

The DNA of the aforementioned films is all over the latest from Disney-Pixar, now streaming exclusively on Disney Plus (at no additional cost with subscription). A young sea creature named Luca (Jacob Tremblay) is intrigued by human gadgets and gizmos he finds, and wants to be where the people are. In this world, if a sea creature leaves the water they take a human form (known as “the change”). His overbearing parents (Maya Rudolph and Jim Gaffigan) tell him to stay far away, and want nothing to do with the human world. Luca meets Alberto (Jack Dylan Grazer), who convinces him that life is more exciting above the sea, and the two spend the summer playing around the Italian countryside. Along with their new human friend, Giulia (Emma Berman), the two of them train for an annual children’s triathlon in hopes of winning enough prize money to buy a Vespa and ride away from all their troubles.

The plot is much simpler than what we’ve grown accustomed to with Pixar. That’s not to say a light, easy-breazy story is completely unwelcomed. But along with how familiar many of the plot beats seem, there is something lacking when it comes to the story. The basic structure of wanting to go above the water to live amongst humans is so similar to The Little Mermaid, yet that film has the wonderful songs by Howard Ashman and Alan Menken. Without the memorable numbers, or doing something more innovative, it feels a little too easy at times.

The animation, while not as near-photorealistic as previous ventures, is bright and colorful – and very pleasing to look at. Pixar went with more of a cartoonish feel to their animation this time around, which works well against the beautiful backdrop of The Italian Riviera. While not the most impressive animation from the studio, it’s nice to get something that looks different than past work.

The film’s simplistic approach to story may not be entertaining enough for everyone, especially small children. It’s great to look at, but the meandering pacing feels much closer to Call Me By Your Name. Similarities of characters, setting, and plot points aside, both films are just kind of about being in the moment. There is really no big bad villain (unless you count a bully named Ercole) – only time, which is running out to train for the triathlon and buy a Vespa before Luca’s parents bring him back home. But on the other hand, there is plenty for kids to relate to – breaking away from your parents’ expectations to pursue your dreams, being accepted for who you are, making friends and nurturing new relationships.

The voice cast is rather good, especially Tremblay as the titular character. He excels at playing these naive characters, and no exception here as the literal fish out of water. Probably the most entertaining performance, however, is Emma Berman as Giulia. She plays a strong female character who isn’t afraid to get her hands dirty and compete against the boys – and doesn’t often need help from anyone. She’s a lovably loud and blunt character who is easy to cheer for.

Nowhere near as good as Soul or Onward, Luca is still an entertaining crowd pleaser that will more than likely be considered “fine” by audiences streaming it at home. A bit too familiar, and not a while lot going on, the film is not likely to make the top of many ranking lists – but even lower teir Pixar is still pretty solid compared to much of the competition.