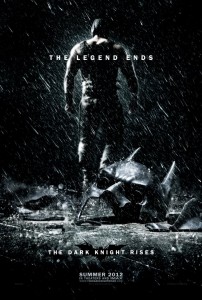 When one mentions the third entry in a medium be it a novel, videogame, or movie, there seems to be mixed feelings that come to mind. Most of people have seen that  sad old story when a well known series has the first two entries strike gold among the masses, but then that third entry bogs down the integrity of what made any said series so great. Such things serve to alter the perception of audiences to  the point of seeking amnesia about the trilogy as a whole just to escape the  agony brought on by that cursed third entry. There are very few trilogies in that I actually enjoyed all three constituents of a story being told, but I’m here to state that in my eyes, The Dark Knight Rises (directed by Christopher Nolan) delivers the proper way to conclude a fine series.

The Dark Knight Rises takes place some eight years after the events of The Dark Knight. Despite the amount of time that passed between the previous entry and this one, it is evident that the events of the previous movie have affected various inhabitants of Gotham City in general. It’s not like TDK was brushed off and this is just another  story just for the sake of a third movie, they’re connected. Bruce Wayne (Christian Bale) has found himself to be frail both physically and mentally, meanwhile the very pristine memory of Harvey Dent has been maintained for the sake of morale. It isn’t very long until a new threat, Bane (Tom Hardy), presents itself to Gotham in a most dramatic fashion. Selina Kyle (Anne Hathaway) AKA Catwoman finds herself in the midst of a war, while having a natural inclination to self preserve by accumulating what isn’t hers. Nolan presents some of the drama present within a popular Batman comic known as “Knightfall”. For anyone who has taken a foray into the comics, you have a relative idea of the struggle set forth for the Dark Knight, but Nolan presents a spin that serves to keep things fresh. Without delving much into the story, I’ll briefly touch upon the performances in the film.

The average movie-goer probably wouldn’t know who Bane is. Well, I should say the proper Bane. As far as film goes, he was last portrayed in the atrocity known as Batman and Robin in which he was  musclebound with the intellect of a rock. This is not the case in The Dark Knight Rises.  I feel a slew of comparisons are going to be made between him and The Joker (played by the late Heath Ledger). Tom Hardy does a superb job portraying one of Batman’s greatest nemesis, not just characterization wise, but truly does look the part. Bane is something of a human wrecking ball in that you’d be wise to vacate the premises once he has his sights set on making something, or someone crumble. He is proportionally strong as he is highly intelligent and observant, much like his comic book counterpart. A noticeable change as far as costume for the character goes, he has a mask that completely covers his face in the comics. In the context of a movie, it was a wise decision to have a mask that covers a fair amount of his face as to ascertain a sinister presence, while at the same time leaving room for Tom Hardy to display emotion. And display emotion he did. His eyes said everything that the rest of the microexpressions usually seen in one’s face could not. All in all, an accurate portrayal of one of the members of the Batman rogues gallery.

I must admit that I was definitely on the fence about Anne Hathaway portraying Catwoman. In fact, I was quite concerned about what that could do to the rest of  the movie. It’s not that I don’t think she’s a good actress, it’s that it didn’t seem like the type of role for her. This is one of those times where I was glad to be wrong. Honestly, I’d go as far as to say that she is the best Catwoman in Batman films in general. She has the attributes of the thieving feline seen in the comics: intelligent, snarky, sexy, and might I add dangerous? So fellow fanboys, you can set aside any nerd-induced heart attack that was to follow upon seeing Hathaway’s performance on screen. The people wearing masks aren’t the only ones of notable mention..

The rookie cop known as John Blake (Joseph Gordon-Levitt), is presented as very idealistic and likeable. His background and his journey serve to make an audience want to invest into his actions around Gotham. You might even say he seems like a younger version of Commissioner Gordon (Gary Oldman). Speaking of the Commissioner, once again it seems that he goes beyond the call of duty and has clearly earned his place among Gotham’s finest. Despite being older, the Commissioner doesn’t let age be perceived as a sign of weakness, but rather experience. After seeing this movie, I exclaimed that I’d certainly want cops like either of these two watching my back. Seriously.

It wouldn’t be right to mention characters, and not mention Alfred (Michael Caine). His character was an integral part of the previous Nolan films, and especially in regard to the comics. It may seem that Alfred does not have all that much screen time, but every scene that he is in is important. The character of Alfred has served as a necessary parental figure for Bruce Wayne. He’s like the remaining constant in the midst of all of the fleeting threats or interests that Wayne has acquired throughout his life. Caine and Bale portray the interactions of these well known characters wonderfully. You actually do feel as if they had known each other for years and in essence are, well, family. Bale does great in illustrating that Bruce Wayne is just a man. He has flaws. Has no superpowers. Just a pervasive will to do what is right.

In closing, The Dark Knight Rises ties together events of Batman Begins and The Dark Knight into one cohesive whole. I wouldn’t so much call it a superhero movie as I would as a drama that just so happens to have people wearing masks. Is there action? Of course there is plenty of that. Believable characters? Yes. It carries an emotional heft not often seen in this genre of film, and it makes it all the better for it. I feel some people may be hard pressed to figure out which one of the three Nolan films is their favorite. That goes to show that the third entry in a movie series doesn’t have to be the kiss of death. The Dark Knight Rises sets out to prove that Batman is not the hero that Gotham city deserves, but rather the one that it needs.

I give The Dark Knight Rises an A