Well, this was a fun weekend.

After a disheartening road trip that saw the Cardinals lose five out of six to the Reds and Brewers, the Cardinals absolutely exploded against the Cubs this weekend, outscoring them by a 23-1 margin and outhitting them 38-17.

Thanks to a hockey-related bet with my lovely friend Christine (who happens to be a native of Chicago and a rabid Blackhawks/Cubs fan), I got to attend Saturday night in some excellent seats with her while she was forced to adorn a Cardinals shirt.

Then, thanks to my lovely friend Amber, I got to attend Sunday’s game as well with her boyfriend, his family, and my friend Sabrina. In other words, it was a pretty awesome weekend.

Even when the Cardinals were going through their rough post-break stretch, the starting pitching was performing well. Adam Wainwright took the loss in two decisions despite surrendering five earned runs in 13 1/3 innings. Joe Kelly took a loss in Milwaukee even though he only gave up two earned runs in six innings. Jake Westbrook lost a game in Cincinnati, but rebounded quite nicely yesterday, pitching seven shutout innings and getting the win when the Cardinals’ offense exploded in the seventh (more on that later). After three consecutive poor outings, Lance Lynn has come back with three excellent starts, earning a win in two decisions while giving up just one earned run in 19 innings (for a nice 0.43 ERA). In those three starts, he has a 1.00 WHIP and 22 strikeouts.

Meanwhile, the most underappreciated starter in the rotation, Kyle Lohse, continued his string of excellent starts, surrendering just three earned runs and 14 hits in 13 innings in his last two starts. Since the beginning of June, in nine starts, Lohse has averaged nearly seven innings a start, and his ERA in those nine starts has been 2.02, while his WHIP has been 0.978. Pretty outstanding. 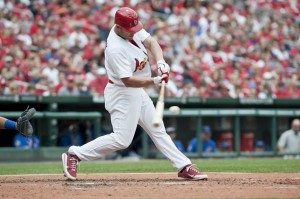 Two of the Cardinals’ five All-Stars, these guys have been pacing the Cardinals’ offense most of the season, and this week they’ve been working in tandem. Beltran is 5 for his last 15 (.333) while slugging .666 in those at-bats. He’s also driven in four runs in his last five games. Meanwhile, Holliday absolutely crushed against the Cubs, going 5 for 10 (.500), getting on base nine times in 14 plate appearances, and slugging 1.300. He’s one of the few Cardinals that hit during the rough stretch; since the All-Star break, he’s hit 11 for 30 (.366) and slugged .666 with 7 RBI in his last nine games.

Craig started his season off tearing the cover off the ball. Another stint on the disabled list cooled him down a bit, but he’s got a nice little six-game hitting streak going on, hitting 8 for 22 in those six games. Meanwhile, Freese has gone through a bit of a power shortage recently, as he has just five extra base hits in June, four of them doubles. His home run Wednesday was his first since June 14 against the White Sox.

Really, though, it hasn’t been super noticeable because he’s been hitting so well. After a rough May that saw his average dip as low as .257 on June 3, Freese has quietly turned it around. In the month of July alone, Freese has slashed .434/.552/.566, and for the first time in his career, David’s on pace to draw more walks (13) than strikeouts (11).

I gotta admit, that seventh inning in Saturday’s game was absolutely incredible to watch. I got a little worried after Freese failed to score on Craig’s double. I was just hoping Furcal would be able to drive in a run or two.

Well, he did. And then some.

According to the Elias Sports Bureau and ESPN, in that seventh inning, the Cardinals:

– tied a franchise record for most runs scored in an inning

– tied the MLB record for most doubles in an inning

The Week Ahead/The Season Ahead

The Cardinals have to bear down after this weekend. Los Angeles, who swept the Cardinals in a three-game series in LA earlier this season, rolls in to town for four games. After that, the team travels to the Friendly Confines to take on the Cubs once again.

Hopefully, the team can take a lot of positives out of this weekend. Yes, it was against the Cubs, who are now 38-56 and 16.5 games out of first place, so they aren’t exactly having the greatest season. They are still a team capable of getting hot and playing good ball; before this weekend, they’d won 14 of their last 19 games, and they hadn’t lost a series in a month, when they got swept by Arizona June 22-24.

This Cardinals team is capable of mashing, as they have the most runs scored in the National League (464), and they also boast the best run differential in the majors (+86). This, however, can also be misleading, as they can pile on in blowouts but can struggle in close games.

As my good friend Nick pointed out, this team is capable of doing everything well; the problem is, they don’t often do it all at the same time. When the offense is going well, often the pitching struggles. When the pitching is doing well, the defense and offense struggle, and so on. This past weekend was about the best I’ve seen the team play since the first month of the season.

Even the much-maligned pitchers in the bullpen are pulling it together:

– Marc Rzepczynski, who’s become just about every online forum’s favorite target, has not allowed a run in his last seven outings. In fact, other than one outing against Miami in which he allowed two hits and two walks in 2/3 inning, he’s only allowed one baserunner in that stretch.

– Fernando Salas, whose ERA reached 6.04 against Pittsburgh, hasn’t allowed an earned run in his last eight outings. In fact, in those 9.1 innings, he’s only allowed three hits, three walks, and he’s struck out nine. Ever since he’s moved his feet on the rubber, he’s gone back to being a dependable setup man, and his ERA is now down to a more respectable 4.41. 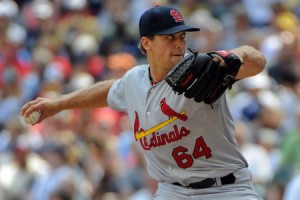 – I got to see rookie Trevor Rosenthal throw his second major league inning last night, and it was pretty electric. Rosenthal has averaged a whopping 98 MPH with his four-seamer, and if he can keep his control, he could be a solid addition to the bullpen this year, perhaps competing for a starting spot next year (he was a starter in the minors). Incidentally, Rosenthal made the leap to the majors from AA, which doesn’t normally happen. I made the prediction before the season that Trevor could possibly reach the majors before top prospect Shelby Miller, but I didn’t think it’d actually happen this season. Rosenthal was 19 when he was drafted by the Cardinals, and he’s just 22 years old. He also throws a cutter and a curveball.

– Barret Browning is another rookie who’s having a solid impact on the bullpen. So far, Browning’s pitched in nine games (7.1 innings), and he’s given up just two earned runs. Interestingly, both earned runs came after he left the game, so he has yet to surrender an earned run while he is pitching. In those nine games, he’s given up just three hits and two walks. Browning’s an older rookie, 27, who pitched for college powerhouse Florida State before he was drafted by the Angels in 2006. He doesn’t have near the power that Rosenthal has; his sinker averages around 87 MPH, but he throws it effectively, along with a changeup, curve, and slider.

With the trade deadline looming in nine days before the waiver trading begins, it wouldn’t really surprise me to see the Cardinals go after some low-risk starting pitching, but I wouldn’t expect them to seek an ace, as some have hoped. The starters are pretty much set, although Joe Kelly is quickly approaching his innings limit. John Mozeliak may go after some lesser pitchers, such as John Lannan, but I’d be surprised to see them land an upper-tier starter like Matt Garza or James Shields.

Finally, congratulations to Barry Larkin and Ron Santo, who were inducted into the Baseball Hall of Fame this weekend.

I didn’t like Barry Larkin when I was much younger simply because he was the first NL shortstop not named Ozzie Smith to win a Gold Glove since 1980. I couldn’t forgive him for that. As time went on, though, I came to appreciate just how excellent he was. Larkin won nine Silver Sluggers, was named to 12 All-Star games, won three Gold Gloves, and in 1995 took home the NL MVP award. Larkin never reached any of the important career milestones, but he was the prototypical powerful shortstop that baseball went nuts for in the late 90’s (A-Rod/Jeter/Nomar).

As far as Ron Santo…yes, I know he was a Cub.

Still, it’s hard to deny the fact that he was one of the greatest third basemen in baseball history. He wasn’t the defensive phenomenon that Brooks Robinson was, but he did win five Gold Gloves. He wasn’t near the complete player that Mike Schmidt was, an offensive juggernaut who also won ten Gold Gloves and three NL MVPs. Still, if you try to list the third basemen in history who had a better overall game than Santo, the list would be extremely short. Cub or not, this was an honor that was far too long in the making, as Santo made it known his greatest desire was to be inducted into the Hall of Fame before he died; alas, Ron passed away in December 2010. It’s absolutely a good thing that the Veterans Committee rectified the situation and finally inducted him, but it’s the opinion of many (including myself) that this honor was a couple years too late.

Regardless, congratulations to Larkin and to Santo and his family. Now, if only we can get Buck O’Neil in there…

Anyways. Thanks again to Christine, Amber, RJ, Sabrina, and pretty much everyone else who made this a dynamite weekend.