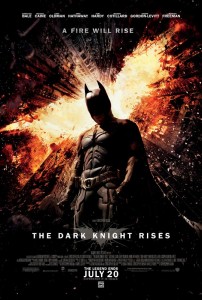 It’s been eight years (in movie time) since the events of The Dark Knight. A battered and beleaguered Batman (Christian Bale), having taken the fall not only for the death of Harvey Dent but his crimes as well, has gone in to hiding/retirement. Meanwhile, Dent has become a hero; a mythical figure whose fraudulent legacy has been used to pass draconian laws that have all but eliminated crime. Ironically, this makes Gotham woefully ill-equipped for its latest masked villain, Bane (Tom Hardy) – a terrorist whose multipurpose disguise conceals his identity, distorts his voice and feeds him a seemingly never-ending supply of an enigmatic narcotic.

Christopher Nolan brings his trilogy to a rousing, if somewhat bloated conclusion. Clocking in at two hours and forty-five minutes, the first hour can feel a bit cumbersome as all the pieces are carefully moved into place. And while that hour does threaten to collapse under its own weight, Nolan takes great pains to ensure that every seed planted in Act One blossoms by Act Three.

While the series wasn’t originally conceived as a trilogy, Nolan along with his brother and writing partner Jonathan Nolan, have masterfully created one retroactively. Making Bane a renegade disciple of Ra’s Al Ghul serves to bring Batman Begins back into the fold; a film that was dangerously close to being dismissed as prologue after the genre-defining Dark Knight. But themes and plot points that seemed forgotten, or at least overshadowed, by the previous installment, make a triumphant return here.

The former film seemed to be rumination on, if not an indictment of, The Patriot Act. How much freedom should a society be willing to sacrifice in exchange for protection from madmen? Admittedly, that’s pretty heady stuff for a comic book film and at first blush it might sound like I’m overthinking it. But remember that Nolan is the man behind Inception, so he knows how to make a thinking man’s blockbuster. Given that the last film ended with our heroes, Batman and Commissioner Gordon, deciding to lie for the “greater good,” many people took the film as a tacit endorsement of the “War on Terror.” However, this time out that lie has come home to roost in the guise of Bane. If Batman is a fascist antihero then Bane is his Occupy Wall Street; spouting populist rhetoric and fomenting anarchy under the guise of justice. Or is he fomenting justice under the guise of anarchy? Both characters make valid points, but where do we draw the line between ideology and extremism? Ultimately the film is that rarest of all things in art: a rallying cry for moderates. Nolan extrapolates both philosophies to their natural conclusions. Batman’s ends with a police state; Bane’s ends with pandemonium.

But make no mistake; this is more than simply Meet the Press in a pair of tights. It’s still a high-octane action movie; it’s just a smart one. While it takes a while to really ramp up (after a thrilling opening scene) the payoff is more than worth the sluggish start. Bane, while never quite mustering the charisma of Heath Ledger’s Joker, is arguably more chilling. Whereas the Joker terrified with random acts of violence, Bane is focused and relentless. (And, for the nerds out there, Bane is a much better character here than he ever was in the comic books.)

The film continues the franchise’s tradition (and Nolan’s for that matter) of eschewing CGI whenever possible, and the film is the better for it. Unlike The Avengers, The Dark Knight Rises feels firmly grounded in reality, even if it’s a reality of its own making. It doesn’t have the sheen or vibrant colors of other comic book movies, nor should it. It’s an exhilarating ride and a thrilling, if somewhat swollen, conclusion to an electrifying run of films.