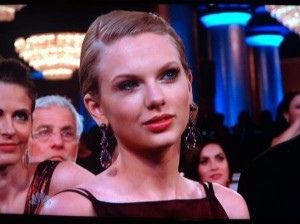 Taylor Swift seems to have a very fragile ego, if that isn’t already apparent by the numerous songs she has written to get back at exes. It apparently doesn’t take much to get on her bad side, and apparently Amy Poehler and Tina Fey achieved this while hosting the Golden Globes earlier this year.  During the show it was revealed that Michael J Fox’s son was Mr. Golden Globe, which promted Tina Fey to say:

“You know what, Taylor Swift? Stay away from Michael J. Fox‘s son.”

“Or go for it,” Poehler continued.

“No, you need some ‘me’ time,” Fey said to lots of applause.

Anyone else with a sense of humor would have laughed it off, but this is what Taylor Swift told Katie Couric about the incident:

“There’s a special place in hell for women who don’t help other women.”

Ouch, damning someone to hell because they made a joke about your ridiculous love life that is propelled by schoolgirl crushes? That’s a bit harsh don’t you think? It isn’t like she was the only one they poked fun at. Although, what do you expect from a person who writes something with the lyrics, “We are never, ever, ever, getting back together.” If someone creates lyrics directly from a Livejournal page, do you think they are going to let someone make fun of them?

Luckily, Amy Poehler has a much better sense of humor about the situation and replied:

“Aw, I feel bad if she was upset. I am a feminist and she is a young and talented girl. That being said, I do agree I am going to hell. But for other reasons. Mostly boring tax stuff. “

“If anyone was going to get mad at us, I thought it would be James Cameron. I did not see that one coming. It was a joke. It was a lighthearted joke.”

I’m waiting for her to release a statement that she is suing the goat who copied her style so well in this video.  Also, because of this article Taylor Swift is now releasing her new single, “All Bloggers Are Poopyheads”. It’s sure to win her a Grammy.