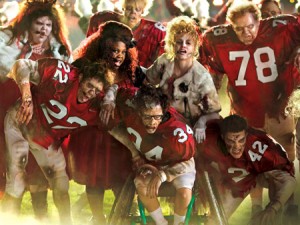 If there was any doubt that Glee deserved its three Golden Globes this year, the Superbowl episode promptly removed it. In its first episode back since early December, Glee capitalized on the biggest sporting/marketing event of the year by integrating football into its enormously popular formula. It even utilized the time honored tradition of beginning with a somewhat provocative opening number that included cheerleaders armed with pointy rocket-bras. With the exception of the Dalton Warblers’ performance of Destiny’s Child’s Bills, Bills, Bills, the songs in this episode were all well chosen, relevant and crowd pleasing. Of course including Lady Antebellum’s Need You Now and closing with arguably the most popular pop song of all time, Thriller doesn’t hurt, the episode even managed to find its original voice within the story.

Aside from a brief appearance by Katie Couric, there weren’t any hackneyed guest appearances to muddy things up, or bizarre side plots to distract from the central story of the characters. The story continued with “macho” football jock Dave Karofsky (Max Adler) bullying the Glee members for…well being in Glee. It isn’t until Coach Beiste and Mr. Schue see how toxic the Glee-Football rivalry has become, that they decide to force the football players into Glee club in order to replace the cheerleaders in their own championship half-time show (which rivaled that of the actual Superbowl’s). Shenanigans en-Sue and everybody learns a valuable lesson…or do they?

We begin to see that Adler’s character, Karofsky is taking a more central role in the story line and for good reason. At a time when it feels like the original members of Glee club have begun to play out their respective roles, we start to see the emergence of some new blood. It’s been reported that the character of Sam is the first of a “new class” of Glee members and since it’s also been reported that Adler was in his high school show choir, it’s very likely we’ll see him up on stage by the time Glee club hits nationals. In possibly related news, it’s been reported that Glee will feature Lady Gaga’s upcoming single “Born This Way” in an episode. Now, it may seem far-fetched but considering Glee’s keenness for advocating gay rights, could Karofsky’s character be the one to perform this future hit? And if they really wanted to amp up the emotionality, they would make it his debut performance at Regionals or perhaps even Nationals…I’m just saying if it were me, that’s how I’d write it.

For a show where visuals and spectacle count as much as vocal talent, the performances of She’s Not There and the Thriller/Heads Will Roll mash-up show why Glee is so enormously popular. Perhaps with the lingering audiences of the Superbowl, Glee may have converted a few more. Here’s hoping Glee will continue the quality of this episode for the rest of the season.

Which performance was your favorite? Let us know below.