Sundance Festival 2011 – “Sound of My Voice” Review by the Raven 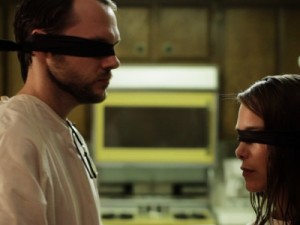 It has been a loooong time since I have seen a film that totally engaged me for the entire hour and a half that it appears on screen.  Director and writer Zal Batmanglij does just that in his wonderful, mystical journey that he takes us on.  His mystical vs. logic battle that is enacted before us draws us in, leaving us begging for more.  I had a chance to sit with him and ask a few questions about this film while at the Sundance Film Festival.  He answered many of my questions about the film, but asked me not to print them…he wants the audience to be surprised and gratified when he is able to release the companion piece.  Could a series be imminent??????

The story is simplistic.  A young couple (actors Christopher Denham and Nicole Vicius) infiltrate a mystical cult, hoping to expose it in a documentary that they are secretly filming.  The cult is led by beautiful Maggie (Brit Marling), an ethereal being who says she is from the future.  A future that is bleak but filled with hope and love.  The people in the secret meetings are called in the middle of the night; blindfolded and cuffed and taken 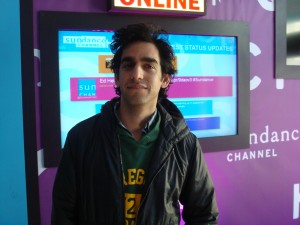 to an unknown location.  They have to know a secret handshake and go thru rigorous training, all to meet this Maggie.  The couple has to shower and scrub before even being allowed to get into the van…a process that everyone must do.  The story has so many different facets that you stay mesmerized trying to stay one step ahead.  Is Maggie really from the future?  Is it all a big scam?

Maggie has a way of getting into each person’s head and molding them, pushing and manipulating them under her spell.  The young couple begins to unravel when one is pulled emotionally into Maggie’s inner circle.  They are faced with ethical choices, to be made and have made for them.  In the end you have no idea where the story will go and you left with an old style cliffhanger…the director assured me all questions will be answered in the sequel…I sure hope so, because I am demanding more!  This is one of the films not to be missed this season at Sundance…I truly hope the buzz surrounding it gets it SOLD!