Sundance Festival 2011 – “Another Earth” Review by the Raven

This year at Sundance has been wonderful.  Wonderful films, wonderful people.  So how do you choose a film or a person that just stands above the rest?  What if that person not only co-produced but also acted in not one but TWO films entered this year?  And what if both films were simply amazing?  Let me introduce you to Brit Marling, who is just that person.  Not only can the girl act, but she writes and produces too?  Maybe she really is an alien or from the future?

Picture a young adult driving a bit drunk on her way home, when on the radio they start talking about a discovery of a new planet.  What if she happens to look out the window and she can actually see it?  And then the unthinkable happens.  While she is stargazing, she strikes another car, killing all the occupants except the driver. 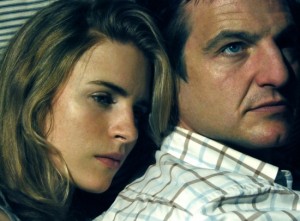 She goes to jail for four years; and around her the world realizes this new planet is a mirror of our own.  She tries to meet the driver of the car she hit and tries to apologize for her actions, only to be drawn in to a situation that she cannot seem to escape.  All the while she is dealing with her guilt and her fascination with the new planet.

Director Mike Cahill has a fantasmic imagination and instead of running loose about alien life and weird planets, he shows the new planet as only a backdrop to a story of self-realization and a road to redemption.  Along with Brit Marling, I see a HUGE future for these amazing and talented people.  They have realized how to make movies that are engaging yet imaginative all at once.