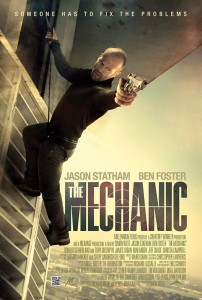 Jason Statham, Ben Foster and Donald Sutherland star in this remake of Charles Bronson’s 1972 film of the same name, “The Mechanic.” Arthur Bishop (Statham) is a ruthless and calculating hitman who finds himself being forced to assassinate Harry (Sutherland), his long term mentor and father figure. After Harry’s death, his estranged son Steve (Foster) happens upon Arthur Bishop. Steve knows that Bishop is a hitman, but doesn’t know that he is the one who killed his father. In his post-adolescent attempts to deal with his anger, Steve convinces Bishop to teach him how to be a hitman.

When I first saw the trailer for “The Mechanic” I thought it would essentially be “The Transporter” without the car gimmick, or “Crank” without the adrenaline gimmick. I was still skeptical about 20 minutes into the movie when I saw the genre standard “shady meeting on a tarmac” scene. But even in spite of that scene and a story that is derivative of so many others, namely “The Professional”, “Karate Kid” or really anything with a master/apprentice storyline, “The Mechanic” still manages to surprise…and in a good way.

While Jason Statham further proves that he has his “speak softly and carry a big stick” role down to a “T” and Ben Foster is great as the cocky and overly ambitious apprentice, they manage to keep it from being cheesy. In fact that’s what makes this film better than the average “loner-hitman” movie. “The Mechanic” is able to find the balance between not taking itself too seriously and taking itself seriously enough to keep the viewer engaged and committed to the story. Story takes first priority as any scene with action feels relevant and necessary. While it’s certainly not “Bourne” level efficient, “The Mechanic” never overplays its card. It’s consistent all the way through and sprinkles just enough humor in the mix to keep it from getting too heavy.

“The Mechanic” is the type of movie that probably won’t have the longevity of the films it references, but will eventually find its place among the forgotten, but worthwhile films of the post-2000 era. Jason Statham makes a good one every now and again and “The Mechanic” is definitely one of his better films.

Worth somebody else’s money

What’s your favorite Jason Statham movie? (And please don’t say “In the Name of the King.”) Let us know below.