I don’t have a problem admitting it when I am wrong, and was I wrong!!!

It is always said that the third pre-season game is the dress rehersal for the beginning of the season. The starters usually play into the third quarter and get tuned up so they can watch the last pre-season game the following week. This lets the coaches make the initial cuts this weekend to the 72 man roster before the final down to 53 just before the season starts. 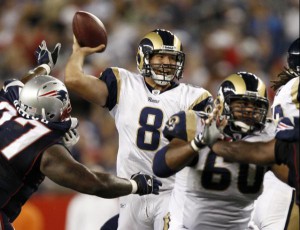 So we finally get to see the number one overall draft pick start a game with all the regulard lineman in front of him, the starting wideouts by his side and Steven Jackson lining up behind him. This was bound to give Bradford more confidence, but he turned into a Pro-Bowl QB against a playoff bound team in the Patriots! Bradford took on the starting Defense and thier guru coach Bill Bellecheck ( I call him Belle-JERK) and disected them like a surgeon! He went 4-4 for 41 yards and his first TOUCHDOWN to rookie tight end Michael Hoomanawanui(Illinois). This tied the score 7-7 early in the first quarter (special teams gave up a game opening kickoff for a Pats TD). 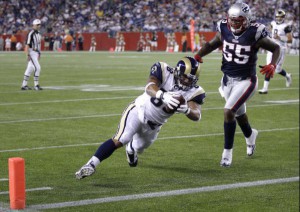 Bradford and the Rams continued to move the ball on the Patriots starting defense ringing up 10 more unanswered points to take a 17-7 lead into the second quarter before Brady hooked up with his tightend Gostkowski. Bradford then showed me something I haven’t seen in nearly a decade, a good 2 min drill! Bradford and the Rams marched down the field setting up Josh brown for a 45 yard field goal to end the half winning 20-14!

Let me just say up front, I HATE THE NEW ENGLAND PATRIOTS!

Coach Spagnuollo had seen enough with the starters beating the Patriots on all sides of the ball and his new franchise quarterback going 15/22 for 189 yards and 2 touchdowns and NO INTS! bradford also handled one of the best blitzing defenses oin the league like a 10 year veteran. So with the starters out I chalked this one up as a win. Then our #3 QB out of DUKE Thadius Lewis led our first drive of the second half down for a touchdown and a 27-14 lead. I forgot about Belle-JERK. 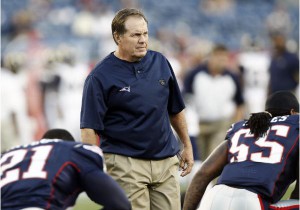 Yes the idiot on the other sideline, Coach Bellecheck played his starting offense and defense into the fourth quarter (no other coach ever does this!) just so he didn’t lose at home to the Rams. So the Patriot’Tom Brady hooked up with Randy Moss who sped by back up defensive back Darian Stewart. Brady and Bellecheck continued to pour it on our reserves until New England took the lead 35-27 in the fourth quarter.

This guy probably clubs baby seals during the off season for kicks!

Too bad for you Billy boy, our back-ups are far better than yours! Lewis drove the Rams downfield again and Keith Toston puched it in the endzone from the 2 yard line (following a botched call by the ref on a Rams TD). this made it 35-33 with over 4 minutes left in the game. 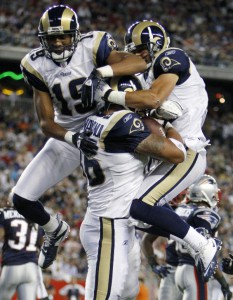 th 3 seconds left Tosten runs to the center of the field setting up Josh Brown for the 37 yard winning field goal! RAMS BEAT THE PATSIES!!!! Sweet Justice for the loser on the other side of the gridiron.

Josh Brown went 3/3 in field goals and made all 3 extra points. Josh is returning to the guy we called “money” a few years ago!

Donnie Avery showed up with 2 catches for 48 yards before blowing out his knee. looked serious and yet another injury to sideline “Mr. Glass” Donnie Avery. Thank goodness we have danario alexander in camp and should be a go to reciever for Feeley and Bradford. Avery’s days as a Ram are numbered.

Lets face it, It is a great time to be a Ram’s fan! We have a new owner that will build the franchise and keep it here, We have a franchise quarterback looking like a pro-bowler in his rookie season, Steven Jackson is healthy and hungry for the ball and we have a defense finally taking the ball away and sacking the quarterback! Plus We beat the Patriots to go 2-1 in the pre-season!!!!!

Bring on Bulger and the Ravens next Thursday at the Edward jones Dome!!!! Get ready to boo our ex-QB. I have informants in Baltimore and they don’t like Bulger anymore than we do! Ram Fans don’t wear the number 10 jerseys next week, spend a few dollars and get the new number 8 jersey! Call it an early Christmas present!!!

I am Ram Man, I will see you next week at the dome and alway look for me in the endzone!