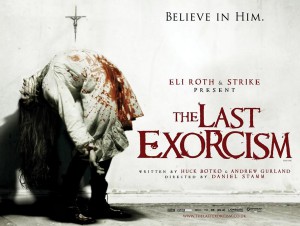 When I first saw the trailer for The Last Exorcism, a film that hits theaters this Friday, I was intrigued.  I like the idea, and while it may be on the whole “hand held, documentary style” bandwagon, I think it works for a film like this.  By far the best moment in the trailer is when you quickly flash to the girl bending backwards.  As soon as I saw it I immediately said “WTF?!”.  Then I decided to base this week’s article off of that single moment.  So this week I give you my top five “WTF?!” moments in film.

5.   First, let’s put this film into context.  I am 12 years old.  A time before I even read anything about any movies and really never paid attention to trailers.  The Sixth Sense scared the hell out of me.  The opening with the guy shooting himself.  Mischa Barton being a dead girl that throws up.  The kid with the hole in the back of his head.  I was 12 so I didn’t know what it meant, but when the ending happened I was still thinking “WTF?!”.

4.  Yes, I have seen The Human Centipede.  I am not particularly a fan of the film, but I was surprised that given the nature of it that it was not more graphic.  You really only need to see the trailer to appreciate the reason this made the list.  When you discover exactly what this doctor wants to do, you immediately wonder who came up with this.  And then the more important question, why did someone think this would make a compelling movie?

2.  How can you have this list and not have The Exorcist?  The movie is a classic providing multiple scenes that would be sufficient for this list.  Of course, I am going to pick the two best known, the spider walk and head spin.  While both of these are not all that shocking by today’s standards, think about the time and the individual involved. And when you think about it try not to say “WTF?”.

1. When I first saw The Ring, it was blowing my mind.  The whole film I had my legs up on the seat and I kept telling myself “What is going on?”.  To this day, the movie is one of my favorite horror films of all time.  While there are plenty of moments to choose from in this movie, my favorite is when you get a quick glimpse of the girl in the closet with her jacked up face.  I immediately jumped and then said out loud “WTF was that?”.

Let us know your favorites!