Steven Spielberg signs on for ‘Harvey’

According to Variety.com Steven Speilberg has chosen his next project, an adaptation of a Pulitzer-Prize winning play by Mary Chase, “Harvey”. 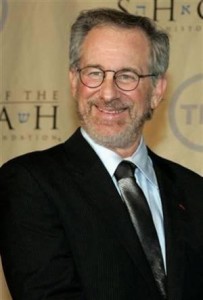 Steven Spielberg has committed to his next film, and it will be an adaptation of the Mary Chase Pulitzer Prize-winning play “Harvey,” which will be done as a co-production between 20th Century Fox and DreamWorks.

It is the first screenplay by the bestselling novelist Jonathan Tropper.

It is the story of an amiable eccentric, Elwood P. Dowd, and his friendship with a six and one-half foot tall invisible rabbit, and how it affects every member of his family and community. The play won the Pulitzer Prize in 1944, and was previously turned into the 1950 Universal film that starred Jimmy Stewart and Josephine Hull.

Project will be produced by Spielberg and Don Gregory, with Elizabeth Gabler and Carla Hacken overseeing for Fox 2000, which acquired the rights in 2008.

“I am very happy to be working again with my friend Tom Rothman who shepherded us through `Minority Report,’ and with Elizabeth and Carla, who I’m looking forward to collaborating with,” Spielberg said. “DreamWorks has experienced a creative and profitable relationship with 20th Century Fox in the past, and I look forward to renewing that time together.”

While DreamWorks has several pictures that Spielberg loves–the Abraham Lincoln project is one–those pictures weren’t ready, and Spielberg wanted to get back to work quickly. He has a strong relationship with Rothman, who with his partner Jim Gianopulos worked with Spielberg and his DreamWorks partner Stacey Snider to bring “Harvey” came together in remarkably speedy fashion, with casting and pre-production to begin immediately, and production starting in early 2010.

“Don Gregory entrusted us with these precious rights, Beth Gabler and Carla Hacken developed an exceptional screenplay and Jim and I had the easy part: Deciding to go first, before anyone else, to a filmmaker who combines the mastery of craft, tone, wit and insight that `Harvey’ embodies,” Rothman said. “Steven Spielberg is film’s greatest humanist. And we feel blessed as Elwood himself to be collaborating with him, Stacey, and everyone at DreamWorks.

The picture gets DreamWorks and its new funding and distribution arrangement with Reliance and Disney off the ground in high style. The film will be 50% financed by DreamWorks’ backer Reliance, with DreamWorks either getting domestic or international and Fox keeping the other. The DreamWorks distribution and marketing will be handled by Disney through its deal with Spielberg and Snider.

Said Snider: “This is a story relevant for all times, perhaps more so than ever before. We are so pleased to be able, with Fox, to be bringing this to today’s audiences.”

Tropper’s books include “The Book of Joe,” “Everything Changes,” “Plan B,” “How to Talk to a Widower,” and his new book, “This is Where I Leave You,” will be published this month.

Well, this looks like a great project for Spielberg. I was looking forward to the Lincoln project, but this looks like it has some potential. I haven’t seen the play or the previous film, but I’ll have to go rent it soon and check it out. Let us know what you think in the comments. Good choice for Spielberg?