Steve Kelley The Unlucky One to Review “The Lucky One” 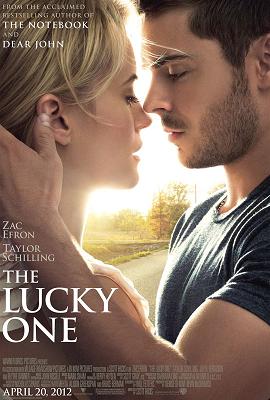 There are things I enjoy watching:

When Erin brought up the idea of seeing The Lucky One, I agreed without knowing ahead of time exactly what I was in store for. As soon as I hopped online and read the name Nicholas Sparks, I cringed. I’ve never been a fan of Nicholas Sparks. He is, in many ways, the Thomas Kinkade (rest in peace) of literature: certainly talented, but extremely formulaic, never changing the structure of his work – only the details (hey, if it sells, why change it?), and always portraying everything in a bright, shiny, romantic light.

Still, because I’m a sucker for the women, I agreed to go, and I also brought my friend Katie and her mother, but only after they agreed to make me dinner. After seeing it, this better be one tasty dinner.

The film starts off reasonably enough. First Sergeant Logan Thibault (Zac Efron) is a Marine concluding his third tour of duty in Iraq. Conducting a night raid, his platoon encounters another Marine platoon; together, the two are caught in an ambush. Logan makes it out, but several Marines die in the attack.

Forward to the next day, Logan sees a reflection in the desert sun and finds a picture of a young woman with the words “Stay safe” scrawled on the back. An instant later, an IED explodes in the spot where he had been. Logan and his friends deduce that this picture obviously is a good luck charm and is the sole reason he’s still alive. Clearly the intense training Marines receive had nothing to do with it.

Upon concluding his tour, Logan returns to his home in Colorado, where he begins demonstrating the early stages of post-traumatic stress disorder. Instead of seeking help for a serious condition, he does what any reasonable person would do. He hops online and miraculously finds within seconds of searching that the lighthouse in the background of the photo is somewhere in Louisiana.

He likes to walk, so, he and his dog walk.

After concluding his journey, he asks around town and tracks down the woman in the photo, Beth (Taylor Schilling). Beth’s brother was also a Marine and died in Iraq around the same time Logan’s platoon was conducting their night raid, which is in no way foreshadowing anything relevant to the plot.

Beth and her mother Nana (Blythe Danner) run a dog hotel just outside of town and are coincidentally in need of hired help, so Logan signs on. Beth is apparently completely oblivious to Logan’s good looks and kind nature as well as to her geographic location, as for a woman from the Bayou she doesn’t have the faintest hint of any southern or Cajun accent.

Logan soon proves his worth around the hotel and even gets close to Beth’s son, Ben (Riley Thomas Stewart), helping draw him out of a somewhat reclusive stage by encouraging him to play the violin. Soon enough the film’s antagonist shows up in the form of Keith (Jay R. Ferguson) a local police officer whose family is well-connected in the community. Soon enough the tensions boil over as Keith gets jealous of Logan’s relationship with Beth and, having few redeeming human characteristics, does his best to drive them apart.

Imagine you’re a woman living at home with your mother and son when all of a sudden, a discharged Marine exhibiting symptoms of a serious psychological condition shows up at your door after abandoning his family and having walked 1,100 miles shows up and claims your picture was his guardian angel in Iraq.

A) call the police?

C) fall in love with him, because “OOOMMMMGGG that’s the most romantic thing ever”?

If he looks like Zac Efron, obviously the answer is C. Nevermind the fact that apparently he couldn’t afford a car, or a bicycle, or even a second outfit or pair of shoes.  Now this stranger who is suffering flashbacks and nearly assaulted his nephew is going to be around your precocious young son, and you never bothered to run a background check on him.

There is also zero character development in the film. Logan is pretty much a perfect male specimen throughout the film: charming, good-looking, intelligent, handy, kind-hearted, and yet he has no friends back home, no girlfriend or wife, and pretty much chooses to dismiss his family for a woman in a picture. It’s a good thing he’s never gone to Vegas and walked down the Strip; he’d have pictures of roughly 200 women he’d have to find. Beth is the single mother who is leery of strangers randomly showing up, yet because he looks like Zac Efron, she’s willing to overlook it. Keith, the film’s bad guy, is nearly pure evil. He loves his son, but he’s callous to the rest of the world if it doesn’t concern his own happiness. Clearly it’s not possible for even a perceived bad guy to have any good qualities.

I’m sure I’ll draw the ire of many of my female friends. For the record, the cinematography is fine, and there is a poignant moment or two. In fact, I consider it an acceptable movie except for the plot, dialogue, interaction, and character development. Everything’s just so…perfect. Even the ending finds a way to conveniently wrap up any loose ends with one swift explanation.

Women, I get the feeling, will love this film. Erin really liked it, and Katie and her mom also enjoyed it. The women around me seemed to get pretty into it, and I noticed a few sniffles during some of the more serious scenes (not from me!).

The bottom line: if you want to see it, the chances are you’ll be willing to overlook its flaws. Women who like Nicholas Sparks movies will probably love it, as it’s more of the same. Most guys, on the other hand, will likely only go see it because their women coerce them into going. As for me, well, it’s not the worst movie I’ve ever seen (I’m looking at you, Splice), but after seeing some pretty solid romantic comedies last year (Friends With Benefits, Crazy Stupid Love), it’s a pretty shattering return to Earth with The Lucky One. This film might have a different title from all the other Nicholas Sparks films and novels, but it sure seems like a sequel to the first dozen.

So, Erin and Katie…about those dinners…

The Lucky One gets a D.

If you are a female and/or in love with Nicholas Sparks films, add a couple letter grades on and make it a B.