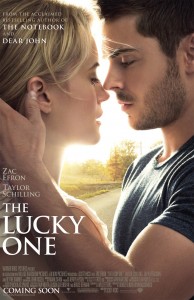 I think by now we have pretty much figured out the Nicholas Sparks formula. Boy meets girl; boy and girl fall in love, only to face impossible odds; tragedy strikes, but somehow love conquers. It started off with Message in a Bottle in 1999, and eventually The Notebook in 2004 – the best and most popular film adaptation of his work. Now after two films in 2010, we have The Lucky One.

Logan (Zac Efron) is a marine that comes back to the states after serving 3 tours in Iraq. During his last tour, he stops in the middle of the road to pick up a picture of a woman – only to narrowly avoid a mortar that would have blown him to bits had he continued on his path. He keeps the picture with him, crediting the woman for saving his life time and time again when he didn’t deserve to live. He makes a promise that if he ever makes it home alive, he will find the woman and thank her. After countless attempts to find the owner of the picture overseas, he does some research on the internet when he gets home that leads him to North Carolina. There he meets Beth (Taylor Schilling) and her grandma Ellie (Blythe Danner) who have just lost their brother and grandson respectively – another marine they call “Aces” (Kendal Tuttle) in Iraq. Logan can’t find the words to tell them that he is there because of the picture, and ends up working at the family boarding kennel. As he grows fond of Beth and her son, Ben (Riley Thomas Stewart), he faces trouble with the local sherrif’s deputy, Keith (Jay R. Ferguson), who is Beth’s ex-husband.

I am definitely mixed when it comes to Nicholas Sparks movies. I thoroughly enjoyed The Notebook, and even enjoyed Dear John – even though there are certainly plenty of things you can pick apart. So going into The Lucky One, I pretty much knew what to expect. If you’ve seen the trailer, you know what you are getting into (as if you didn’t already know just by who wrote the novel). And I was pleasantly surprised with just how enjoyable the film was. Now don’t get me wrong; there are plenty of things that seemed a bit unrealistic, and just downright silly. But if you can get past some of those little unpleasantries, it makes for a great Friday night date to the movies.

Zac Efron has developed into a pretty good actor over the past few years. I never thought I would say that, knowing that he comes from the Disney kids’ movie world. But then again, who would have known that huge talents like Justin Timberlake and Ryan Gossling would have come from the Mickey Mouse Club? And Lindsey Lohan started off as a Disney star when she was a child… well, never-mind that. Although I think Efron was a little young for the role, seeing as how the other adults around him seemed about a decade his senior, I thought he did a great job in the serious role. He seemed hardened, as he should having served three tours in Iraq, and made himself appear more mature than you would think. If you haven’t given Zac Efron a chance, I think you should. He isn’t going anywhere for a long time.

Going back to my original statement, if you like movies like The Notebook, A Walk to Remember, or Dear John – you know what you are getting into with The Lucky One. And chances are that you are going to enjoy it. Although most of the films based on Sparks’ novels are flawed, it doesn’t mean they can’t be entertaining. If you are even the slightest bit of a romantic, it’s one of those feel-good movies where it seems like it’s possible to beat the odds – even with the cards stacked against you.

The Lucky One is a B-