***Spoiler Laden*** Reaction to “The Cabin in the Woods” and why it’s so good. 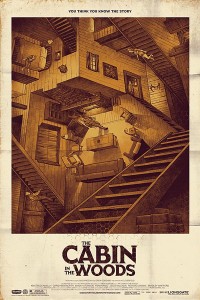 In a time of endless remakes, sequels and reboots, when movie studios have devolved to the point of building franchises off of board games (Battleship, Monopoly, Ouija), it’s no wonder The Cabin in the Woods has garnered so much attention for subverting expectations. If you haven’t seen the movie, don’t read this article.

You watched it right?

Ok, so here we go. The Cabin in the Woods has managed to do what few other films of its kind have. It has not only managed to be a fantastic entry to the horror genre, but it has managed to do so while subverting the horror genre and offering a commentary to said genre. Unfortunately, because of its subversive nature, the film has to be marketed as a fairly straightforward horror film. The average high school and college kids that think they’re going into another slasher flick, are probably going to be thrown for a loop when the film opens with Richard Jenkins and Bradley Whitford in a secret underground lab.

Filmmakers Joss Whedon and Drew Goddard obviously love horror movies. They’ve watched enough of them to parody the standard horror tropes we’ve seen time and time again, but with The Cabin in the Woods we’re shown the damning nature of these horror films and how they should be logically interpreted by society.

While watching The Cabin in the Woods, I frankly thought they were going in a different direction. About halfway through the movie, I predicted that the Jenkins and Whitford characters were the architects of all modern horror movies. Suggesting that the viewing public was the audience and what we’ve come to expect as “horror movies” are actually highly manipulated real life scenarios, captured on tape for our viewing pleasure. When the film didn’t take that route, I honestly felt a little disappointed. I was hoping for something less supernatural and more meta…more cynical of Hollywood and its stupid horseshit movies. It wasn’t until a few days later that I realized that I’m not smarter than Drew Goddard and Joss Whedon and that they in fact may have incorporated those feelings into the film.

While my version would have been more overt about its meaning, it certainly would have been less interesting as a horror film. With the version that actually exists, we are left to infer several things about the film’s meaning. It seems that the film is not only lampooning what the horror genre has become, but also its audience. The film makes a point to talk about how the Ancient Evil Gods used to be satisfied by throwing a girl in a volcano and now they require more drama and more suffering. In a film that uses the notion of these “sacrifices” from within the framework of the horror movie genre, I can’t help but see a correlation between the Ancient Evil Gods and the actual viewing audience of horror movies. A hundred years ago, audiences were thrilled by the moving picture of a train as it appeared to drive into a theater. In 2012, audiences don’t blink twice when people’s arms are severed or heads are chopped off.

What does that say about us? The Cabin in the Woods takes this notion further in a way that some have criticized as poor character development. Many critics have shunned the film for its thin characters, particularly the five kids in the cabin. I’ve come to believe that this was intentional and served to ask the question of which is worse: showcasing the murders of people you care about or showcasing murders of people you could care less about? Films are typically judged by their ability to elicit some type of emotion, it should be obvious then that a film that elicits sympathy, empathy or pity for a beloved character that dies has done a good job. But what does it mean when audiences flock to a theater to watch torture porn, where no character is fleshed out beyond an occupation, gender or age group. I dare anyone reading this to think to themselves and name one victim of any horror movie ever made. Why is it that even a casual genre fan could name Freddy Krueger, Jason Voorhees or Michael Myers, but fail to name any one of the hundred people those characters have killed. Maybe a few of you out there could name Jamie Lee-Curtis’s character from Halloween, but not many.

Horror fans have come to expect the same movies with different packaging. How different are the aforementioned characters, really? I find it interesting that the “maintenance” department wins the betting pool in The Cabin in the Woods as they purportedly always do. Is this meant to symbolize Hollywood’s seemingly need to “maintain” rather than innovate? I don’t know. But I’m giving credit to Whedon and Goddard for it anyway.

It takes a very talented team to pack so much commentary in a film that could appear fully superficial to the untrained eye. So now that all the conventional monsters have been “released”, where does the horror genre go now? Leave us your comments below.