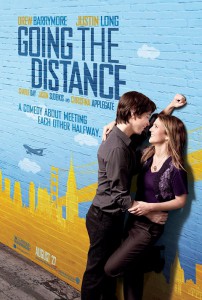 “The only way you can ever be content is if you marry your best friend.”

This line, perhaps the most profound sentence ever uttered by any actress who starred in ET and flashed David Letterman, is one of the more poignant lines of the film Going the Distance. Technically billed as a romantic comedy, the movie is never overly sweet and there’s plenty of humor for even the guys in the audience to appreciate.

I have to admit, I kind of went into the movie blind. I’d seen a preview or two, but I didn’t really know the plot of the film. Fortunately, my lovely companion Erika filled me in a bit. She then conveniently “forgot” her credit card so I would have to pay for the soda and popcorn. Very convenient, Erika. Very convenient indeed.

The plot of the film revolves around Erin (Drew Barrymore), a newspaper intern in New York for the summer, and Garrett (Justin Long), an artist and repertoire rep for a small music label, who meet in a bar while playing a video game. Garrett messes up her chance at a high score; to compensate, he buys her a drink, and they eventually do the dirty spend the night together. Afterwards, they manage to strike up a true friendship and begin to date.

Unfortunately, Erin can only remain in New York for six weeks before she has to head back to Stanford to finish up graduate school. Not wanting to lose each other, they agree to try a long-distance relationship, and much of the film revolves around their attempts to stay close and their visits to each other.

Most of the typical romantic comedy cliches are present in the movie; outside temptations, miscommunication between the couple which leads to misunderstanding, etc. This leads to an air of predictability in some parts, but fortunately the movie is funny enough to overcome this flaw. This movie has several absolutely hilarious scenes, much of which is built around the banter among Garrett and his buddies, Dan (Charlie Day) and Box (Jason Sudeikis). The conversations the three of them have seem genuine and unrehearsed and make for some of the more entertaining moments in the film. Christina Applegate does a good job as Erin’s protective and somewhat neurotic sister and Jim Gaffigan is absolutely hilarious as her husband. The messages regarding love and romance are also the standard lessons that romantic comedies tend to teach, but in this case, the style manages to cover for the substance.

Barrymore and Long are the centerpieces in the film, and their chemistry works well. Barrymore seems comfortable in her typical light-hearted romantic lead role. The real surprise of the film is Justin Long’s performance. Usually typecast as the awkward, lanky teenager, a la Warren Cheswick in the television show Ed, he’s hit the weights and plays a slightly more serious character. Don’t get me wrong, he’s still a little awkward in some spots, but he isn’t as deliberately nerdy.

The music sets the tone throughout the film pretty well, with most of the score a deliberate acoustic track that sets the mood. The film also prominently features the indie rock band “The Boxer Rebellion,” which should garner a lot more fans after the exposure it’s about to receive. They’re pretty talented, and it’s unfortunate that they haven’t gotten the attention they deserve, as Garret laments in the film the fact that pop stars get the most attention and money in the business.

As Erika and I left the movie, she seemed pretty entertained and my wallet seemed a lot lighter. But I found the film quite amusing and entertaining. The film is rated R for language, dialogue, and a little too much Justin Long than I cared to see. But if you can look past that part, you’ll find a pleasant date movie you won’t be embarrassed to see.