Steve Kelley says, “I Don’t Know How She Does It,” Either 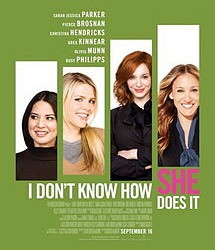 I think in the last year and a half, I’ve seen every different type of chick flick/romantic comedy possible. I’ve seen the typical, run-of-the-mill (Letters to Juliet, Going the Distance), the hilarious (Friends With Benefits, No Strings Attached), and the emotionally involving, somewhat good (Love and Other Drugs, Crazy Stupid Love). At some point, they have to run out of ideas for romantic comedies. Actually, I think they already have, but are just repackaging them.

Enter I Don’t Know How She Does It. “Steve, you are a remarkable film reviewer. I assign you to the films for which I need the best reviews possible,” my editor’s never told me. But, he was in a tight spot to get a review for the movie, and being the altruistic gentleman that I am, I agreed. I’d honestly never heard of the film, but enough of my female friends (all five of them) had that I knew it would most likely be a romcom. Incidentally, the friend that I brought with me, Alison, hadn’t heard of it either.

Kate Reddy (Sarah Jessica Parker) works as an analyst for a financial management firm. She travels around the country a lot, which means that her architect husband, Richard (Greg Kinnear) has to stay around the children while she works. The two strain to make things work but somehow manage to get things done. Kate is a charismatic figure and has a solid supporting cast around her, including Momo (Olivia Munn), her Harvard-educated assistant who’s capable of multi-tasking and being incredibly gorgeous. This perfect little world is shaken up, however, when Jack Abelhammer (Pierce Brosnan), one of the big suits in the firm Kate works for, hears out her presentation for a new investment opportunity and decides to work with her in making a presentation to the head honcho (I’m not really sure what the official titles of any of these guys are, but it’s not entirely necessary; you know what I’m getting at). This job requires her to travel even more as she’s preparing to make her presentation, further straining the household as Richard notices how much time she spends with Jack, who just happens to resemble the main character in some James Bond films.

The person who feels the impact of her absence the most, however, is Kate. She is already self-critical because she feels she doesn’t live up to the requirements of a perfect mom; instead of baking a pie for a bake sale, for example, she buys one and attempts to make it look homemade. She notices that her daughter begins to resent her constant travels as well, and she is forced to make a decision about what’s the most important thing in her life.

Parker and Kinnear do admirable jobs as the leads. They’re not incredibly attractive supermodels posing as parents, they’re old and secular enough that they present feasible characters. Portraying a feeling of intimacy isn’t easy to feign, but they do a solid job of showing two adults who are at the stage in their life that the comfort they have around each other risks turning into complacency. Pierce Brosnan is, well, Pierce Brosnan. He’s charismatic enough, but he isn’t given enough of a chance to shine, which isn’t a bad thing; as a supporting role, he’s perfectly fine.

The dialogue is witty and flows well enough, but the plot itself is absolutely nothing new. Sure, the film tries to change up the formula a bit by making the female the career-oriented head of the household, but in the end, the problems the couple face are pretty much interchangeable with any other romantic comedy’s. A lot of films nowadays seem like they’re simply scripted from a Mad Libs-style template, and sadly, this is the case. Some of the intended humorous moments are quite predictable, which takes away from their impact. Still, there are a couple of funny scenes.

The presentation of the film, on the other hand, is pretty slick. Director Douglas McGrath manages to cleverly frame different scenes, and his use of freeze framing everything but one person adds to the film.

Guys who have to go see this film will no doubt consider Olivia Munn the best part of the film. She is an attractive lady, but she’s also quite funny in her stolid thoughts.

Still, the presentation and acting can’t really overcome what’s become an incredibly tired formula. A woman struggling to make it while keeping her family together and dealing with an attractive co-worker…seems like it’s been done before. I told Alison, “This seems like a film version of ‘Sex and the City.'” Sarah Jessica Parker even narrates it, like the tv series. Not that I watched the series. The ending seems forced in an effort to shoehorn a happy ending within the allotted time frame, despite the efforts to make it appear otherwise. I don’t expect every good film to break new ground, but I also don’t like the ability to predict what’s going to happen in the next scene.

I Don’t Know isn’t the worst romantic comedy I’ve ever seen; for the most part, everything about is well done. I just know that I’ve seen it before. If you’re looking for a date movie, this isn’t a terrible choice. Alison seemed to really like it, and when a pretty lady is happy, I’m happy. Just know you’re picking out a reliable sedan and not a sports car, and your expectations will be met.

I Don’t Know How She Does It gets a C.