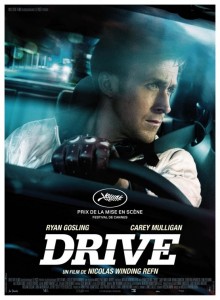 Nicolas Winding Refn’s latest feature, Drive, is the best film of the year.  Sucking you into the dark and intense world of the Driver, played pitch perfectly by Ryan Gosling, the film will not leave you anytime soon after.

The film’s nameless protagonist is a stuntman/auto mechanic who has quite the night job.  An expert driver, for a certain fee he will give you a five minute window to do what you need to do, and as long as you are back in that car in that window he will get you out of there.  Our story begins when the Driver begins to get to know his new neighbor, Irene, and he begins to form quite the connection with her and her son.  This will ultimately lead to quite the set of unforeseen circumstances.  What unfolds is a dark journey into the underworld of LA that puts everyone around the Driver at risk.

I am not digging into the plot any further because the twists and turns that unfold keep you on the edge of your seat for most of the film’s runtime and you should go in as clean as possible; I knew nothing going in.

The opening scene is phenomenal, perfectly setting up the Driver character, the film’s tone and pacing, all of which it will blow up by the end of the picture.  The evolution of the character and the film comes naturally and very affectively as the shit hits the fan and the Driver has to adjust to the powers coming down on him on the fly.  The story doesn’t break a whole lot of new ground but the assembly and progression of the plot is flawless making the proceedings all feel new again.

The film is a technical marvel, with Refn getting a chance to shine with his biggest budget yet.  Always an interesting eye behind the camera, Refn composes shot after shot here that just wows and he and his cinematographer Newton Thomas Sigel have crafted one of the finest looking pictures of the year.  Cliff Martinez also puts together an excellent score that might be my favorite of the year so far (and that is saying something when there have been four from Michael Giacchino so far this year).  The film is also superbly assembled, featuring some great editing and pacing that takes the tension to nearly its limit.  The film also slips in the brutal violence to particularly great affect, never glorifying it and using the film’s sound design to build it up so that when it hits, it hits hard.  All of these elements come together to give the film a distinct feel and style that helps make the picture standout all the way down to it’s font’s style and color selection.  Praise can rarely get higher for a film.  And that jacket, oh baby.

Refn assembles a cast to die for, with Ryan Gosling leading the way in almost every scene.  The noir style will put your hero in the line of danger and Gosling handles it with cool intensity.  Gosling not only takes the punches but deals them out too, and when he flips that switch, look out.  Bryan Cranston continues to show his versatility as Shannon and he captures the character’s good guy with bad luck traits to a T.  Albert Brooks is marvelous as the LA crime lord, Bernie, and he gets to show off his comedy chops in-between his moments of polite ruthlessness (that will make sense when you see the film).  Carey Mulligan is reserved and sweet, as the neighbor Irene, and she works wonderfully with Gosling to make us believe she is worth fighting for.  The two’s relationship takes up most of the film’s first act and it works to give the film stakes; Refn takes the time to make us care about these people.  Oscar Isaac continues to impress, as Irene’s recently released from prison husband, and he makes the absolute most out of every minute he gets on screen; he continues to be one to watch.  Ron Perlman has a lot of fun here and gets to play things big and bad which is right in his wheelhouse.  Christina Hendricks has a brief role as well and does fine work, getting to be a part of possibly the best scene in the movie to boot.

In the end, Drive is not to be missed.  Surpassing Tree of Life as my favorite of the year, Drive is also immensely more accessible then that film.  The film is a fresh and original take on the crime noir thriller that features great acting, a couple great action set pieces, and a plot that will have you diving deeper and deeper into seedier territory.  The film’s brutality will make anyone squeamish, but it is brief and limited to only a few scenes.  Your connection to the characters is what will get your heart racing the fastest as you watch them be put at risk, a testament to the greatness of the film.  Nicolas Winding Refn has made a masterpiece and it is already an all-time favorite for me that I can not wait to see again.  If something tops this film this year I will be pleasantly surprised, because that means we are having an extraordinary year at the movies.

Drive is an A+