Movie Review: ‘Step Up Revolution’ – Let There Be 3D and Dance! 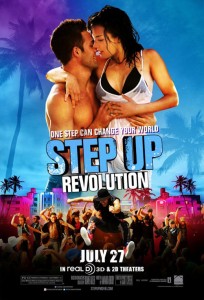 Going into Step Up Revolution I had seen the first 2 films, so I wasn’t going in completely cold to the fourth entry in the series. I will admit that I like some of the style in these movies, and watching people dance. Sure, I can get into that. So for moviegoers who enter into the theater with a positive attitude expecting to have some fun, you will be highly rewarded. If you are expecting ‘Batman’ – go see Batman. He’s good too.

The title phrase “Revolution” comes from the dance group in this movie who call themselves The Mob. The Mob, run by best friends Sean (Ryan Guzman) and Eddy (Misha Gabriel), is the local Miami dance crew whose neighborhood is being threatened by development plans by hotel mogul Mr. Anderson (Peter Gallagher). However, Mr. Anderson’s daughter Penelope (Cleopatra Coleman) is a professionally trained dancer looking to make it in the local dancing company. Sadly, you do not find out the true plot of the movie until 2/3 of the way in. Once again, come for the style and dancing, not for lateral plot points.

Part of the style of the movie comes from the use of 3D – and boy, did they use it. Like Avatar used it. Dancers, effects, and stunts will be coming at you all movie long. At the beginning it was actually pretty good. But by the end, I just wanted to watch my bouncing cars and bungee lines on a 2D screen. 3D is a great tool for this sort of movie, but I felt it was just a bit overused in ‘Revolution.’

Finally, the dancing and music. Per current trends, it felt like dubstep was 95% of the soundtrack and was a large component in how the movie is taken in. The dancing was erratic, but solidly precise on hard beats. It keeps the eyes entertained and the viewer involved throughout the whole movie. All of it works together and gives off its individual tone.

If you are looking for dancing and an overall upbeat and fun movie, Step Up Revolution is for you. Just don’t over think it.