Start your own PIRATE RADIO station… on your desktop!

“Pirate Radio” is the high-spirited story of how 8 DJs love affair with Rock n Roll changed the world forever. In the 1960s this group of rouge DJs, on a boat in the middle of the Northern Atlantic, played rock records and broke the law all for the love of music. The songs they played united and defined an entire generation and drove the British government crazy. By playing Rock n Roll they were standing up against the British government who did everything in their power to shut them down. The band of rebels is lead by The Count, played by the Academy Award Winning Philip Seymour Hoffman, Quentin the boss of Radio Rock, Gavin the greatest DJ in Britian, Midnight Mark, Doctor Dave and Young Carl who comes of age amidst the chaos of sex, drugs and rock n roll. The film features an unbelievable selection of music including The Beatles, The Stones, Beach Boys, Dusty Springfield, The Who, Jimi Hendrix, Smokey Robinson, David Bowie, Otis Redding, Cat Stevens just to name a few. The film is laugh out loud funny and speaks to the rock n roll rebel in all of us.

PIRATE RADIO is in theaters November 13! 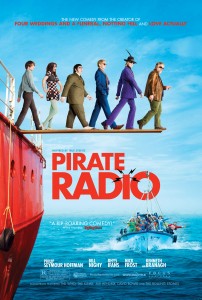