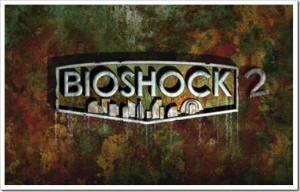 Set on New Years Eve of 1970, ten years after the events of BioShock, a number of towns around the world have been reporting kidnappings of young girls, with witnesses reporting the attackers as both extremely fast and thin, with red lights often reported as either being worn by the attacker or spotted nearby in the sea. This single attacker is in fact the Big Sister, one of the Little Sisters from the first entry in the series, who has mechanized herself in a similar fashion to the Big Daddies and has become the ruler of the underwater city of Rapture. Under her control, the city has reached an equilibrium in which she “actively maintains the city’s infrastructure, and viciously hunts anyone down who disrupts the balance of power”; Tenenbaum, discoverer of ADAM and original creator of the Little Sisters, also states that the Big Sister has begun kidnapping girls to turn them “into creatures like her”. Tenenbaum also states that she is “like the golem story, not understanding the sin that she does”, hinting that her actions may be manipulated by a different force. It is also known that Sofia Lamb, a former political rival of Andrew Ryan has taken over Rapture, and created a new religion called ‘The Rapture Family’. (source: Wikipedia)