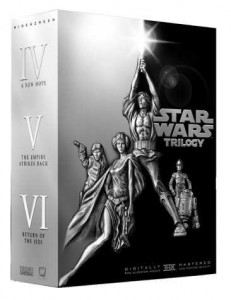 Ever since Blu-Ray was announced fans of films such as Star Wars have been salivating to see their favorite films in HD. This weekend at the Chicago Comics and Entertainment Expo, Steve Sansweet, Director of Fan Relations, gave an interview to IGN about the possibility of the Star Wars films coming to an HD format like Blu-Ray.

“We have been at work for a couple of years working on—I won’t call it the Ultimate Set because we keep finding stuff—but, a very full set of all six movies on Blu-ray with lots of extra material.,” Sansweet told IGN. “We’re finding all kinds of scenes from dailies that have never been seen before. Beyond all of those things that you know about… there are some real treasures.”

What does he say about when it will be released? “We’re not ready to announce exactly when it’s coming out, but it won’t be in the too distant future.”

So, there you have Lucasfilm is at work on a Blu-Ray box set that should sate fans desires for a bit. Although, I wouldn’t hold my breath on release. Does anyone remember how long it took Lucas to release the Star Wars films on DVD? For someone who considers themselves a pioneer, he sure does take a while to adapt to new home video formats.