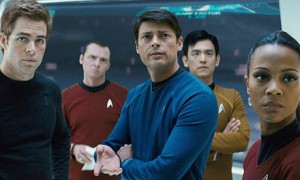 Bruce Greenwood recently gave an interview to Hollywood.com where he talked about the upcoming Star Trek sequel, and gave the start date for shooting as January.

“I just know that the plan is to film it in January, more than that, I don’t know,” Greenwood said.

Greenwood also discussed the fate of Admiral Pike, and how he hopes to have a part in the next film.

It was later announced by TrekMovie.com that Greenwood’s information was false, producer Bryan Burk said that shooting will not begin until late spring or early summer.

The Star Trek sequel sure is taking its time being released. J.J. Abrams and crew don’t seem to be on the same two year sequel release that everyone else seems to be on. Hopefully, this is a signal that they are aiming for a quality return, rather than an excuse to make a quick profit. Although, the wait could be due to the heavy schedules of some of its stars which include Chris Pine, Simon Pegg, John Cho, Zoe Saldana, Karl Urban, Anton Yelchin, and Zachery Quinto.

What do you think? Are you ready for this movie to get here? Let us know in the comments!