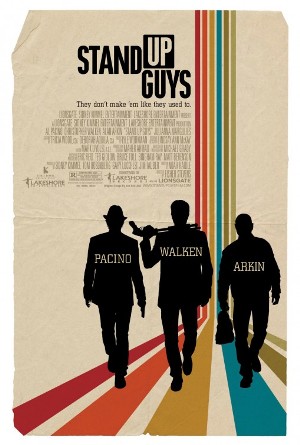 The idea of older men trying to hold off Father Time isn’t exactly a new concept. In fact, the idea’s been done several times over in Hollywood (see: Wild Hogs, Space Cowboys). The novelty here in Stand Up Guys rests in the star power director Fisher Stevens has at his arsenal: three Academy Award-winning actors working in cohesion. While these three gentlemen may no longer be the most sought-after leading men in Hollywood, they show in Stand Up Guys they still pack a punch, figuratively and literally.

Doc (Walken) leads a pretty boring life. In the morning, he gets up and paints a picture of the sunrise, watches “the cable” on television, tries to eat healthy, and goes to sleep, only to wake up and do it again. But today’s different. Today, his old friend Val (Pacino) gets out of jail after spending 28 years behind bars. After an awkward hello, they almost immediately fall back into old times, breaking into a pharmacy to hijack prescriptions, stealing a new Dodge Challenger, visiting the brothel run by the daughter (Lucy Punch) of an old friend.

It’s all fun and games until the duo head to a diner, where they’re waited on by a lovely young lady named Alex (Addison Timlin). Over a dinner of surf and turf, Val forces an admission from his old friend. Doc’s got a mission: to take out Val for their old boss, Claphands (Mark Margolis). It seems the crime Val was sent away for cost Claphands’ son his life after he got caught in Val’s crossfire, and Claphands has refrained from killing Doc just so Doc could finish the job as soon as Val was released.

As the night goes on, Doc begins to realize he cannot complete his assignment. Looking for more adventure, the two drive to the retirement home their old friend Richard (Arkin) resides. Sitting in a chair, attached to an oxygen tank, Richard immediately seizes his opportunity to break out and joins the duo on their adventures.

Thirty years ago, this film would have likely received a lot more pre-release attention, as Pacino, Walken, and Arkin were three of the hottest names in Hollywood. As it is, it didn’t seem as though too many people paid attention to the trailers. I took my lovely friend Elizabeth, who had no idea what the film was about.

It’s a shame, though, because Stand Up Guys delivers on many fronts. The chemistry between Pacino, Walken, and Arkin seems genuine, despite the fact that they’ve never worked together on the same project. As expected, the film is rife with jokes about being old and trying to turn back the clock, but it does it well.

Beyond the jokes, though, is the more serious issue of facing a life’s dwindling clock. Lamenting the effects of age, Val remarks, “They say we die twice. Once when the breath leaves our body, and once when the last person we know says our name.” Pacino gets to bust out some dance moves, showing he hasn’t lost too many steps since his famed tango in Scent of a Woman. Walken provides excellent support, as does Arkin.

Stand Up Guys will likely slide past most members of my generation given the age of the actors and the release of younger, sexier movies like Gangster Squad, and it’s a shame. Pacino and Walken show us they’re not too old to have some fun, and the result is an entertaining, if at times slow, ride. Elizabeth didn’t really like the ending, as it’s pretty ambiguous, but I felt it was the perfect way to end the film.

So if you’re out and about this weekend and looking for a funny film that might also give you pause, give Stand Up Guys a chance.

Stand Up Guys gets a B.