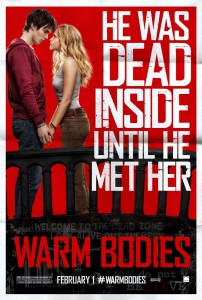 When you think of a zombie movie, the first thing that comes to mind is a good love story – no? If not, you aren’t alone. It is a combination that has never been tackled before, as zombies usually don’t retain any of their human feelings and emotions. Most of the time the only thing they want to do is eat humans, let alone kiss them. But that is what makes Jonathan Levine’s brilliant “rom-zom-com” so great.

R (Nicholas Hoult) is a zombie unlike any we have seen before. Seldom do we get to know a zombie, and never have we been able to get inside of their heads. But in this instance we can, and in Jonathan Levine’s zombie apocalypse R wants something more than what he has become. He walks around, day after day, with hardly any other interaction from his fellow living-dead. His only friend is another zombie named M (Rob Corddry) who he shares the occasional grunt or stare with. On the other side of the wall, General Grigio (John Malkovich) leads the human resistance who believes they hold the last key to humanity on earth. When his daughter Julie (Teresa Palmer) and a group of friends venture into zombie territory to search for supplies, R feels something he hasn’t felt in a long time – romance. During a struggle between the zombies and Julie’s friends, R rescues her and takes her to his home on an old airplane to keep her safe. The two begin a unique friendship, as R struggles to regain his humanity.

If you haven’t guessed it by now, the story is built around a Romeo and Juliet type story (hence the names R and Julie). Although the underlying theme is something we have seen a hundred times over, never have we seen it in this context. And its uniqueness is what makes the film so fantastic. We have been hit with a lot of zombie films over the years – some good, and some bad. But in the end, they are all pretty similar. But never have we gotten to know the zombies like we do in Warm Bodies. The zombies we know are always the bad guys, trying to eat the humans that we are routing for. Instead we actually get to know them in this film, and cringe every time a gun-wielding human threatens their existence.

You are probably looking at the main character R, played by Nicholas Hoult, and feel like you know him from somewhere. Hoult is probably most famous for his role as the kid in About a Boy, and has most recently been seen in X-Men: First Class and A Single Man. The young actor does an amazing job as the lead of the film, relying mostly on his facial expressions and body language. His chemistry with actress Teresa Palmer is fantastic, and watching the awkwardness of a zombie trying to interact with a human he likes is something that words can’t explain. Their relationship is a lot of fun to watch.

Rob Corddry is great as R’s best friend M. His character grows a lot during the movie, from trying to eat humans to eventually helping R to bridge the gab between the two sides. Corddry was perfectly cast in the role, and his performance garners many of the big laughs.

Whether or not you are a fan of zombie films, Warm Bodies is something that can appeal to a wide array of audiences. The film isn’t a horror film, and doesn’t really have anything scary in it that tries to make you jump out of your seat. It is a fresh take on a story we all know, and takes us to a place that we never could have imagined we would see with zombies. With a great cast, clever writing, and an overall uniqueness for the genre, it is a very pleasant surprise for early in the year and one I would highly recommend.

Warm Bodies is an A-