31 Years Ago Today, the Computer Virus Was Born

Happy 31st birthday to me! No, really. I’m a human, and it’s my actual birthday. Thirty-one years ago today, I was unleashed unto this world. It wasn’t until a few days ago, however, that I learned I wasn’t the only demon spawned on January 30th, 1982. 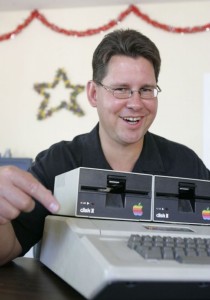 Richard Skrenta, pictured with an Apple II like the one he used to create the first computer virus.

That same day, in a suburb of Pittsburgh, Pennsylvania, a 9th grader at Mt. Lebanon High named Richard Skrenta decided to take his pranking to a new level. You see, back in those days he and his friends would often trade pirated software. Not much has changed since then, amirite? But this was the dawn of 1982. ARPANET wouldn’t migrate to TCP/IP until a year later. Public internet was still years away. Pirating at this point was still done over the physical realm. They literally traded floppy disks.

Telling your friend “Hey, check out this game!” was accompanied with handing over a tangible object.

Rich would often add small bits of code to the disks he handed over. His friends were greeted with pop-up messages taunting them as they would boot up the games. His teasing got to a point where his friends stopped taking disks from him out of annoyance and distrust. This did not stop the young jokester. Skrenta later recalled that “aha moment” on his blog:

“I realized I could essentially get my program to move around by itself. I could give it its own motive force, by having it hide in the resident RAM of the machine between floppy changes, and hitching a ride onto the next floppy that would be inserted. Whoa. That would be cool.”

It was over winter break when 15-year old Rich set out to put his theory into code. It turned out to be 400 lines of code on his Apple II computer. Yes, you read that correctly: the first PC virus in the world was for an Apple product. While there may have been viruses written before Skrenta’s, his was the first to reach its way “into the wild”. He dubbed it Elk Cloner. The virus itself was harmless. Every 50th boot greeted the user with a short poem on their display:

Elk Cloner: The program with a personality
It will get on all your disks
It will infiltrate your chips
Yes, it’s Cloner!
It will stick to you like glue
It will modify RAM too
Send in the Cloner!

Skrenta later went on to create such projects as NewHoo (acquired by Netscape in 1998 and renamed the Open Directory Project), Topix (a news article aggregator), and is currently working on Blekko, a search engine aimed at taking on Google. Recently, they released a tablet app called “Izik” for iOS and Android that hooks into Blekko’s search engine.

Trivia: Microsoft Windows wouldn’t see a virus until 1986. Can you name that virus?