The Repertory Theatre of St. Louis Recieves “Shakespeare for a New Generation Endowment”

I’ve seen many plays at the Rep, and it is truly a fine theater company. It is always great to see places that expand the arts rewarded in some way.  Their upcoming season starts September 8th with, You Can’ t Take it With You.   Click here for ticket information, and to find out more about St. Louis Repatory Theater. 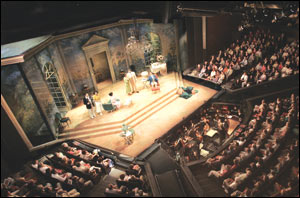 ST. LOUIS, MO –The Repertory Theatre of St. Louis announced today that it is one of 40 nonprofit, professional theatre companies that will receive a grant of $25,000 to participate in Shakespeare for a New Generation from June 1, 2010-May 31, 2011. Part of the NEA’s Shakespeare in American Communities initiative, Shakespeare for a New Generation introduces middle- and high-school students to the power of live theatre and the masterpieces of William Shakespeare. Managed by Arts Midwest, the program has benefitted more than 1.5 million students and their teachers with live performances and educational activities since the program began in 2003.

The Rep is also one of six participating companies that will receive additional funding of $10,000 through a partnership with the Coordinating Council on Juvenile Justice and Delinquency Prevention, which organizes federal programs for at-risk youth among multiple federal agencies. Funds for the grants are provided through the Office of Juvenile Justice and Delinquency Prevention (OJJDP), U.S. Department of Justice, and will support performances and educational activities targeted to youth involved with the juvenile justice system.

“The Rep is honored to be part of the Shakespeare for a New Generation grant program from the National Endowment for the Arts. We are thrilled that we can share our production of Macbeth with more audiences because of receiving this special funding,” said Steve Woolf, Artistic Director of The Rep.

The Rep will present four student matinee productions of Macbeth, and will provide accompanying educational activities to more than 25 schools. The additional grant, which is supported by the Office of Juvenile Justice and Delinquency Prevention, U.S. Department of Justice, will allow The Rep to expand the reach of its Shakespeare for a New Generation program activities to youth involved with the juvenile justice system. The Rep’s activities will include student matinees of the Mainstage production of Macbeth with accompanying classroom support; a Teaching Artist Residency with two high schools; and an Artist Residency program with incarcerated youth in partnership with Prison Performing Arts and Artistic Director, Agnes Wilcox.

“We are proud to support bringing Shakespeare to America’s students,” said NEA Chairman Rocco Landesman. “I have seen firsthand how the productions supported through Shakespeare for a New Generation have connected youth with Shakespeare – sometimes for the first time – inspiring them and creating the next generation of audiences. At the same time, this funding increases work opportunities for our theatre artists.”

Including the newly selected companies, more than 80 of the nation’s theatre companies have taken part in the NEA’s Shakespeare program since its inception. By June 2010, participating theatre companies will have presented performances at 4,000 schools in 2,500 communities in all 50 states and the District of Columbia.

Founded in 1966, The Repertory Theatre of St. Louis is a fully professional theatrical operation belonging to the League of Resident Theatres, The League of St. Louis Theatres and is a constituent member of Theatre Communications Group, Inc., the national service organization for the not-for-profit professional theatre. It operates independently of, but under a mutually beneficial agreement with, Webster University. The Rep operates under an agreement between the League of Resident Theatres and Actors’ Equity Association, the Union of Professional Actors and Stage Managers in the United States. The Rep hires directors and choreographers who are members of the Society of Stage Directors and Choreographers and stagehands who are members of the International Alliance of Theatrical Stage Employees. Financial assistance for this theatre has been provided by the Arts and Education Council of Greater St. Louis; the St. Louis Regional Arts Commission and the Missouri Arts Council, a state agency. This project is supported in part by an award from the National Endowment for the Arts, a federal agency, which believes that a great nation deserves great art. The Rep is also grateful for support by more than 1,100 generous individuals, families, corporations and foundations throughout the communities we serve. Thank you.