The 2013 campaign for the St. Louis Rams kept fans on an emotional roller coaster all season long.  There were  the highs of blowout wins over Chicago, Indy, and New Orleans, the emergence of Zac Stacy as a feature back, and Tavon Austin racking up 3 touchdowns of over 55 yards in a little over a quarter against the Colts. There were the lows too, though:  an injury that prematurely ended Sam Bradford’s season (which was statistically the best early season of his career), abysmal losses to Dallas and Tennessee, and coming up one yard short against the Super Bowl-bound Seattle Seahawks on Monday Night Football. 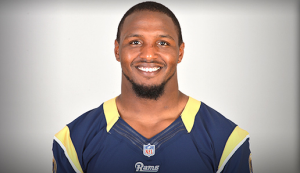 Throughout this topsy-turvy season, however, there was one constant:  Defensive End Robert Quinn was dominant.  He was not just one of the Rams’ best players; he was one of the best players in the entire NFL.  This was confirmed last week when Quinn received the prestigious PFWA (Pro Football Writers of America) Defensive Player of the Year Award.  And the honors didn’t stop there.  He was selected to the Pro-Bowl as a first-team all-pro and earlier this week was picked to be one of the four Pro-Bowl captains.

Quinn was drafted by the Rams in the first round of the 2011 entry draft (14th overall, out of North Carolina) and played in 15 games during the 2011 season, making only 1 start and recording 5 sacks.  During his second season, he started to show flashes of the player he would become.  In 2012 Quinn played in all 16 games, making 14 starts while recording 10.5 sacks — second on the team.  He was also second in quarterback hits (17) and quarterback pressures (25).  He received one NFC Special Teams Player of the Week Award in Week 8 as well.

Quinn’s third season as a pro was even better.  This year he recorded a new team record with 19 sacks, breaking Kevin Carter’s mark of 17 set in 1999.  His 19 sacks ranked him second league- wide; he was also second in the league in forced fumbles, of which he had a team leading 7.  The 23-year-old started all 16 games in 2013, making 57 tackles and recovering 2 fumbles, receiving the Sports Illustrated Defensive Player of the Week award twice and the official NFC Player of the Week award once.  Quinn’s play this season brought something back to St. Louis that has been missing for a long time, electricity.  There was discernible energy in the Dome any time Quinn broke through the line and approached the quarterback.  For fans who stayed to the end of the Rams Week 16 win over Tampa Bay, this excitement was palpable when Quinn ran down Bucs quarterback Mike Glennon for the team-record breaking sack on the last play of the Rams season at home.  For the first time in what seems like years the home schedule was punctuated with cheering fans excited for the future.

You will next be able to watch Quinn and fellow Rams teammate Johnny Hekker (punter) this Sunday when they compete in the 2014 Pro-Bowl (6 p.m. on NBC) in Oahu, Hawaii.