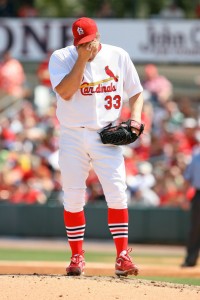 The first month of the regular season wraps up tonight with the Cardinals taking on the Cincinnati Communists at Busch.

St. Louis wraps up April with no fewer than 15 wins, currently four games ahead of its nearest competitor. Although the outcome isn’t entirely unexpected, the manner in which it was reached has been.

When I first started writing in the pre-season, I thought the Cardinals would be relying mostly on their offense, led by Pujols, Holliday, Rasmus, Ludwick, and Molina.

Of course, I also used to think the Ninja Turtles lived in the sewer outside my house and would spend hours yelling into the sewer, resulting in years of therapy and new neighbors every couple of years. 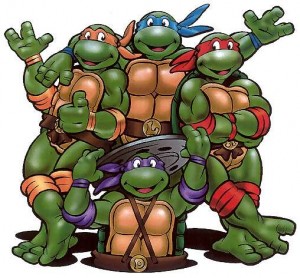 Instead, the offense has somewhat sputtered, hitting just .251 as a team.

Oh, sure, there are bright spots. Colby Rasmus is living up to my pre-season prediction of mediocrity by hitting only .344 with 6 HR, 12 RBI, and leading the league in OBP and SLG.

Yadier Molina’s been coming on as of late, currently third on the team in RBI. Another pleasant offensive surprise, David Freese, is second with 15.

The rest of the team, however, has struggled or been merely pedestrian. Ryan Ludwick is hitting .294 but hasn’t been a steady offensive force. Matt Holliday has had his moments, but perhaps the ginormity of his contract has weighed on his shoulders in the outset. Skip and Brendan Ryan have also put up disappointing numbers, with both of them struggling at or below the Mendoza line.

Rather, the Cardinals have prospered almost primarily on the strength of their arms. St. Louis boasts the best team ERA in the majors at 2.64. The starting rotation has been incredibly strong, with a record of 12-3 and an ERA of 2.65. Even the weakest link, Kyle Lohse, has contributed two quality starts.

The much-maligned bullpen, thought to be the Achilles heel of the team, has also performed remarkably well, with an ERA of 2.59 Remove Lopez and Mather’s three innings, and that drops even further to 2.41.

Jason LaRue was activated this past week, as was expected, thus ending the first stint in the majors for Bryan Anderson. All in all, he performed pretty well. He only played in four games, but had two hits in seven at bats and drove in one.

The Cardinals also re-signed fan favorite Aaron Miles to a minor league contract, presumably so he and Nick Stavinoha can perform hilarious hijinks together as twins.

The Cardinals just finished off their first series sweep of the season, taking all four from the Atlanta Braves. It’s safe to say the Cardinals are playing as well as any team in the majors, having gone 7-3 in their last ten games. Brad Penny takes the mound tonight against Johnny Cueto.

I will be at the game with three lovely lady friends, reporting under the warmth of my free Sluggie, which I will apparently be giving away to one of my friends after the game. If you’re gonna be there, come see me and upgrade our tickets, as we’ll be in the upper deck, most likely getting rained upon.