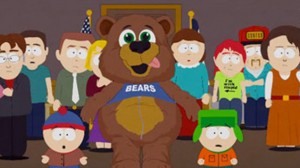 Trey Parker and Matt Stone are no stranger to bad press. Their hit animated show has just hit its 200th episode, and so far they have left no one unscathed. Celebrities, religions, and even race is mocked in the satirical show.  Parker and Stone haven’t given into the criticism, but that doesn’t mean their network hasn’t.

The 200th episode of South Park had a finale in which Muhammad is shown in a bear suit.  Now a radical Muslim group, RevolutionMuslim.com, have said the creators have made a grave mistake in depicting the prophet Muhammad. Abu Talhah Al-Amrikee of New York has written a piece on his website where he claims the show has “outright insulted” the prophet.  Al-Amrikee has said, “that what they are doing is stupid and they will probably wind up like Theo Van Gogh for airing this show.”  Van Gogh was a Dutch documentary filmmaker and columnist who was assassinated for his views on Islam. Al-Amrikee’s article posted graphic pictures of Van Gogh’s death as a warning.

Al-Amrikee has posted the addresses to the South Park production office in California, and the address to the headquarters of Comedy Central in New York. The article was also accompanied by a Huffington Post report detailing the Colorado retreat that is owned by Parker and Stone.

Abut Talhah Al-Amrikee has come out in support of bin Laden before and after this has been released. He claims that this is merely a warning, and that his group includes active protesters, but he did not ask them to “conduct violence”.

“We look up to him and admire him for the sacrifices he has given for the religion,” he said.

Comedy Central has now started to censor the episode since the posting.

What do you think about this? Should Comedy Central not back down to extremists? Do you think this is overblown? Let us know in the comments!