Believe it or not I have been playing a lot of Risk lately.  There was an article on Digg, Reddit, or a site similar to it about free versions of Risk. So I downloaded one of said free versions and have wasted more time than thought possible playing the computer (always start with Australia). So, naturally since it is on the top of my mind, I was intrigued by the option to turn Risk into a movie. I’m not sure how they plan on turning it into a movie…. 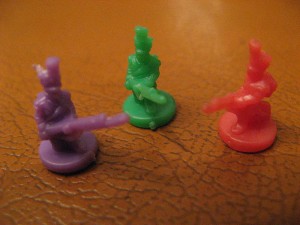 Sony Pictures Entertainment has acquired from Hasbro, Inc. the motion picture rights to produce RISK, the classic board game brand of world conquest, it was announced today by Doug Belgrad and Matt Tolmach, presidents of Columbia Pictures. The film will be produced and developed by Hasbro’s Brian Goldner and Bennett Schneir and Overbrook Entertainment’s James Lassiter.

Commenting on the announcement Belgrad said, “Hasbro has already seen tremendous success with Transformers and G.I. Joe and audiences have shown a great desire for films that bring to life everything that has made these franchise properties stand the test of time. The strategic thinking and the tactical gambles that players must take in the game are what make RISK a classic, thoroughly engaging game. Those elements translated into an action-packed, thrilling story are what will make this a uniquely exciting movie.”

Lassiter added “We are excited to be working with Hasbro and Columbia Pictures on bringing such a beloved and well-known game to life on the big screen. We have two television projects currently in development with Hasbro Studios and look forward to this collaboration.”

“We are thrilled to be working with tremendous partners like Sony Pictures and Overbrook Entertainment on RISK,” said Brian Goldner, President and CEO of Hasbro, Inc. “Like so many of Hasbro’s brands, RISK resonates with consumers of multiple generations around the world. We can’t wait to re-imagine this brand into a motion picture.”

The game was invented in 1957 by French filmmaker Albert Lamorisse as La Conquete du Monde (The Conquest of the World). Two years later, Parker Brothers published the game in the U.S. as RISK. According to Hasbro, RISK was a groundbreaking game, the first board game to offer nonlinear movement. In the game, players compete on a map of the world, amassing armies and attempting world domination, or, as its rules put it, to “occupy every territory on the board and in so doing, eliminate all other players.” The game has sold millions of copies and spawned several variations, with settings ranging from movie properties to various periods from world history to the moon.

I understand turning other Hasbro properties such as Transformers and G.I. Joe into movies, because they fit so well with modern day blockbuster films. Risk had no story to it other than, wipe off all the other blocks off the map. I can’t wait to see who the antagonist is. Maybe it is Asia because it too large of a land mass, and has too many points of entry…