Sneak Preview of Drag Me to Hell – 6 Exclusive Movie Clips 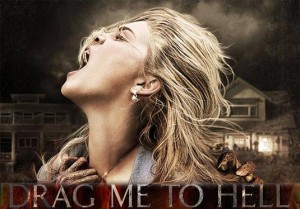 From Sam Raimi, the director of “Spiderman” and the “Evil Dead” series, comes DRAG ME TO HELL.

Christine Brown is an ambitious L.A. loan officer with a charming boyfriend, professor Clay Dalton. Life is good until the mysterious Mrs. Ganush arrives at the bank to beg for an extension on her home loan. Should Christine follow her instincts and give the old woman a break? Or should she deny the extension to impress her boss, Mr. Jacks, and get a leg-up on a promotion? Christine fatefully chooses the latter, shaming Mrs. Ganush and dispossessing her of her home. In retaliation, the old woman places the powerful curse of the Lamia on Christine, transforming her life into a living hell. Haunted by an evil spirit and misunderstood by a skeptical boyfriend, she seeks the aid of seer Rham Jas to save her soul from eternal damnation. To help the shattered Christine return her life to normal, the psychic sets her on a frantic course to reverse the spell. As evil forces close in, Christine must face the unthinkable: How far will she go to break free of the curse?

Check out these exclusive clips from the film, and don’t forget to check out DRAG ME TO HELL, in theaters on Friday –