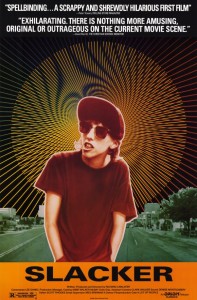 One of the key American independent films of the 1990s, Richard Linklater’s feature debut is an audacious look at the twentysomething culture in the college town of Austin, Texas. Set over the course of a 24-hour period, the film is a collection of short, unconnected glimpses into the dropout subculture, touching base with a variety of musicians, students, street people and general eccentrics. While there’s no real plot to speak of, Linklater’s eye for nuance and gift for dialogue are superb, and the portrait he paints is so uncannily accurate that the term “slacker” was almost immediately co-opted as a media buzzword, one interchangeable with the similarly-overused “Generation X.” Regardless, the film is an evocative reflection of a community and its culture and remains a definitive artifact of its time and place. ~ Jason Ankeny, All Movie Guide