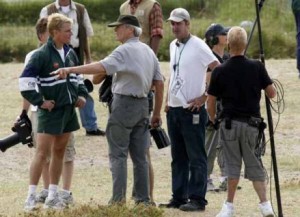 The latest film from Academy Award winning director Clint Eastwood, INVICTUS will be released nationwide on December 11, 2009. The film, starring Morgan Freeman and Matt Damon, is the story of Nelson Mandela (played by Freeman) and his fight to unite Africa. Damon will play the captain of South Africa’s Rugby team, who is enlisted by Mandela to help bring the country closer together by sport. The movie is based on a true story, when the country’s rugby team made an unexpected visit to the 1995 World Cup Championship match.

Check out the official release below:

“Invictus” tells the inspiring true story of how Nelson Mandela (Morgan Freeman) joined forces with the captain of South Africa’s rugby team (Damon) to help unite their country. Newly elected President Mandela knows his nation remains racially and economically divided in the wake of apartheid. Believing he can bring his people together through the universal language of sport, Mandela rallies South Africa’s underdog rugby team as they make an unlikely run to the 1995 World Cup Championship match.

A Warner Bros. Pictures presentation, in association with Spyglass Entertainment, “Invictus” is being produced by Eastwood; Lori McCreary, under her and Freeman’s Revelations Entertainment banner; Eastwood’s longtime producing partner Robert Lorenz, for Malpaso Productions; and Mace Neufeld for Mace Neufeld Productions. The screenplay is by native South African writer Anthony Peckham, based upon the book Playing the Enemy, by John Carlin. Freeman, Tim Moore, and Spyglass Entertainment’s Gary Barber and Roger Birnbaum are serving as executive producers.

Filming on “Invictus” was accomplished entirely on location in and around the cities of Johannesburg and Cape Town, South Africa.