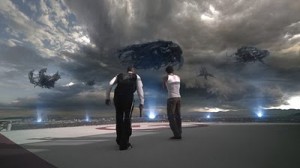 Part of me wants to love this trailer. That part loves the fact they are using real things astrophysicist Stephen Hawking said not long about alien life. Big geeks like me, and some of my friends, love to debate what would happen in the actual instance that we encounter alien life. So, starting the trailer out like that piqued my interest.

Imagine my disappoint when I saw a teaser trailer for yet another rehash of an alien invasion scenario. The teaser trailer gives us absolutely nothing to go that we didn’t already know about it. I almost think they would have been better off just leaving it as the news reports, and leaving a little mystery to the plot. Instead we are treated to boring CGI that really impresses no one.

I’ll save my final judgment until a full trailer comes out.

In the sci-fi thriller Skyline, strange lights descend on the city of Los Angeles, drawing people outside like moths to a flame where an extraterrestrial force threatens to swallow the entire human population off the face of the Earth.