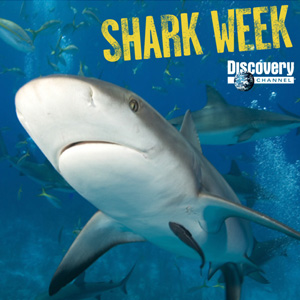 It’s that time of the year again. You know, the time when you celebrate the creation of huge fish with razor sharp teeth, that swim around in the ocean – looking for humans to scare. That’s right – Shark week is back, on the Discovery Channel! And they have some all new programming to spice things up! Let’s hope it’s not a flounder…

From Channel Guide Magazine
Blood in the Water – Kicking off Shark Week on Aug. 2, this drama brings to life the true story that inspired Jaws. In 1916, the New Jersey shore became a feeding ground as five people were attacked in 12 days, triggering a nationwide panic. It was the first multiple shark attack in American history, and the folks back then didn’t have a Shark Week to help them learn what was going on (or to scare them out of the water). In an interesting example of how little we knew about marine biology then, an expert at the time believed the attacks were caused by the gentle sea turtle, which he described as “of a vicious disposition and, when annoyed, extremely dangerous.”

Day of the Shark 2 – Described as a “harrowing hour,” this special looks at what happens when a great white shark breaks through a 300-pound aluminum shark cage and traps the divers inside; when another tackles a former Navy SEAL in shallow waters; and when a bull shark invades a spearfishing trip in the Bahamas. Seems to fit in with the current trend in Discovery/Animal Planet programming that details attacks on humans by various animals, notably sharks.

Deadly Waters – Les Stroud (Survivorman) is back for more shark action, this time venturing to five of the most notorious shark-infested waters in the world to find out which is the most dangerous.

Great White Appetite – While the great white shark swims along the shores of more than 50 percent of the world’s inhabited coastlines, scientists still don’t have accurate data on their population, mating practices, traveling patterns or what drives their feeding behavior. This special travels the globe with experts seeking out these answers.

Shark After Dark – No, not a Playboy Channel special. We know little about what sharks are up to at night, but now, armed with the latest in infrared heat-sensing cameras and night vision technology, a team of divers descend ishark-week-2nto the dark abyss to learn about shark behavior after sundown.

Sharkbite Summer – An account of the so-called “Summer of the Shark” in 2001, when sharks attacked more than 50 swimmers off U.S. beaches and journalists were even more ravenous in their hunger to create “summer of the shark”-type headlines.