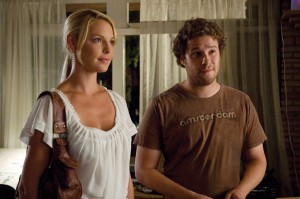 Well, this story has really been going on now for a couple years now. Ever since Heigl’s original comments about the hit 2007 comedy that propelled her career to new heights, Knocked Up. Heigl called the Judd Apatow film “sexist” and “paints the women as shrews, as humorless and uptight, and it paints the men as lovable, goofy, fun-loving guys”.

This is not the first time Heigl has bitten the hand that feeds her. Heigl told the press last year she would not put herself up for an Emmy nomination because the writer’s of Grey’s had not given her any material she felt was worthy. Just last week, she went on air and publicly complained about long days on the set of Grey’s, which the response of ABC was that it was to accommodate her schedule.

Both Rogen and Apatow say that Heigl was great on set, and improvised many of her own material, which made them surprised about the comments. Neither has recieved an apology since the comments were made, and have not talked to the actress since.

Although Rogen insists he isn’t too worried or hurt by it. He just insists that that her thing right now. “I’ve got to say it’s not like we’re the only people she said some batshit crazy things about, That’s kind of her bag now.”

I can’t say I’m a big fan of Heigl, and her ever expanding comments never help her situation, but what do you think of her? Is she being unfairly attacked? Are her comments justified?