Sequel to “Valentine’s Day” Already in the Works? 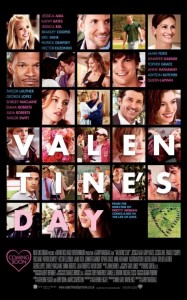 I won’t see Valentine’s Day until tonight, so I can make no judgement on the quality of the film. I can say that it looks very closely to the style of Love Actually, but instead of Christmas elements it has elements perpetuated by the greeting card industry (or Valentine’s Day, which ever you prefer to call it). This is actually one of the reasons why I’m excited for it. I think Love Actually might be one of the best ensemble cast films of all time, and I’m hoping that this film capture some of that magic. Seems like studio execs already believe that it that special magic.

Producers of the film Valentine’s day, Josie Rosen, Mike Carz, and Wayne Allen, are apparently planning a thematic sequel to the film Valentine’s Day, which opens nationwide February 12th.  The group is planning on the film’s success a script which would follow up the film with a New Year’s themed version of the film. The thought is that they can complete another film with a large high profile ensemble cast, and grab the actors at discounted rates, that will most likely make the film more profitable.  They have plans for director Garry Marshall to return to the director’s chair, and for some of the characters to return to keep continuity going throughout the series.

If the film has a good opening weekend, expect an announcement next week on if they plan to fast track the film into production for an end of the year release.