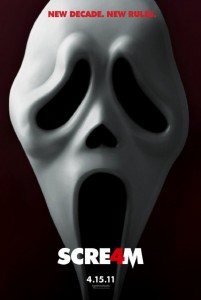 “Scream 4” is the next horror film to come out that is hoping to re-energize their respective franchise. I personally think that it is a waste of time, but everyone is different and maybe the fans want to see what else Wes Craven can give us.

Once again, Wes Craven returns to direct the fourth installment in the franchise. “Scream 4” brings us lots of new faces, and some old ones as well. New to the cast are Emma Roberts (Valentine’s Day), Hayden Panettiere (Heroes), and Adam Brody (The OC). The familiar faces than join them are Courtney Cox, Neve Campbell, and David Arquette.

The story picks up ten years after the third film in the series. Sydney Pescott (Campbell) has become a successful writer and has taken her new book on the road for promotion. She stops in her old town of Woodsboro to catch up with Gail (Cox) and Dewey (Arquette). This homecoming also brings home another familar face, the ghostface killer.

Today, we get one of our first looks on the set of the film. Mr. Craven hanging out with a hanging body: 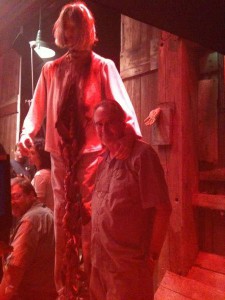 Does this image get you excited for a new Scream film or do you not care? Let us know what you think below in the comments.