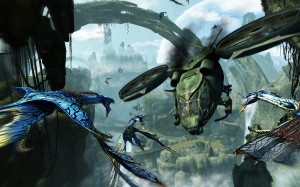 I wasn’t fully on board the Avatar bandwagon.  The film is beautiful to look at.  The 3-D is far and above anything I have seen.  And Cameron did create a new, vast world with endless possibilities.  I could have watched dozens of films to get the exact same story.  But it seems that I am in the minority since audiences around the world were mesmerized by it.  A sequel was inevitable.

Sam Worthington recently talked to Moviefone about what he knows regarding the sequel:

“He (Cameron)  had some ideas he told us while we were filming, which were really cool and out there. At the moment, he’s still writing what he calls ‘The Bible’ and detailing the world. Once he’s detailed the world — more so than it’s already detailed in his big brain, anyway — then he said he can write the script and we can go explore the world — things like going underwater … going in the floating mountains.?

I always joked and said that they were married and Jake Sully got lazy and Netiri kicked his butt. But there is something to [the notion of being] in a genetically-engineered body now, which he is. Is there a “use by” date on it? I don’t know. What’s the new dilemma? Is it just humans coming back, or is something even bigger than can threaten them, can threaten the world? We can look at our world again and see that we know we’re hurting the environment, and we know we can do things about it. But what else are we doing that’s wrong so it can reflect on our own life?”

There are two things that I deduce from what Worthington had to say.  First, we are a long way from getting our next trip to the world of Pandora.  Sounds like Cameron won’t even start working on the script for possibly another year.  Second, Worthington knows nothing about the sequel since he only provides questions about where the story is headed that any number of fans could have posed.

Are you looking forward to another trip to Pandora?  What was your favorite part of the first film?  Let us know in the comments below.