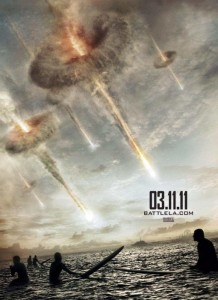 When I first read about Battle: Los Angeles, I was very skeptical.  It seemed like another film jumping on the coat tails of District 9.  I love District 9, but I don’t want to see this overload of films about alien invasion made on a meager budget.  I saw the posters released during Comic-Con and read the comments from the cast made during their panel.  But all actors say that their movie is great before it comes out.

Then I saw the first trailer.  I absolutely fell in love with it.  It is edited perfectly.  The music works great with the footage shown.  I love that you get to see the ships and explosions, but you never quite see what the aliens look like.  Just enough to leave you wanting more.  And I am definitely wanting to see more.

For years, there have been documented cases of UFO sightings around the world — Buenos Aires, Seoul, France, Germany, China. But in 2011, what were once just sightings will become a terrifying reality when Earth is attacked by unknown forces. As people everywhere watch the world’s great cities fall, Los Angeles becomes the last stand for mankind in a battle no one expected. It’s up to a Marine staff sergeant and his new platoon to draw a line in the sand as they take on an enemy unlike any they’ve ever encountered before.

Is this a movie you are looking forward to?  What do you think of the poster?  Let us know in the comments below.