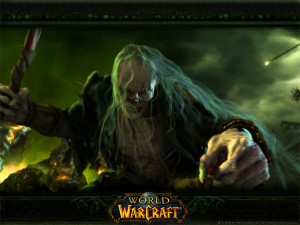 Sam Raimi has signed on to direct a film adaptation of one of the biggest video game franchises ever, Warcraft. He is set to start working on the film once production wraps on Spider-man 4.  Warner Bros. will be co-financing the film along with the game developer Blizzard, as well as being the distributor.

Warcraft started with three hugely popular strategy games, but what it is now known best for is ‘World of Warcraft’ a massively multiplayer online role playing game (MMORPG). Warcraft tells the story of the Alliance and the Horde. Players can play as either side and are often united against a common enemy such as the Burning Crusade or the Lich King. Currently there are over 11.5 million subscribers to World of Warcraft, also know as WOW, which makes it the most popular MMORPG by far.

The series has long featured very detailed CG cutscenes to introduce the games. It is a property that has a lot of story behind it, and it seems at first it might be hard to adapt. With the sucess of films like Lord of the Rings, Warner Bros. no doubt wishes to cash in on that audience. It already has a huge audience to draw from and a high profile director like Raimi might help make it closer to Lord of the Rings, than Eragon.

Having played the games the idea seems very intriguing to me. The only thing I wonder is if they can make it appeal to a mass audience or just to the hardcore gamers who play?