The 2010 Rams Are Going to the Super Bowl, if They Buy Tickets

Mark it down, you read it here. The St. Louis Rams are going to the Super Bowl.

Just…not this year. Maybe a few of them might get tickets. But eventually, they will go to the Super Bowl as a team.

Coming off a 1-15 season last year, the Rams have at least one thing going for them: they can’t get much worse. Perhaps this is why my exes have such better luck with their next relationships.

I’m going to split my preview into two parts. Because I can.

Is Sam Bradford the next savior of the Rams?

If so, he’s gonna need a sweet haircut like Tim Tebow. 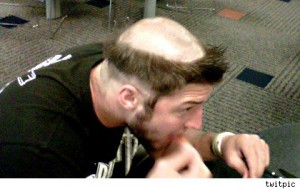 So holy the halo's just growing from his head now.

By no doubt, those of you who follow the Rams intently are drooling after the Rams’ scrimmage last weekend. By all accounts, Bradford was magnificent, throwing his balls accurately [Editor: couldn’t you phrase this a little better?]. Rumor has it he threw two touchdowns with one pass. Impossible, you say? Not for Sam Bradford.

Obviously, it’s a scrimmage. Quarterbacks aren’t allowed to be tackled, and three of the Rams’ top cornerbacks weren’t participating. But still.

The most valuable commodity in this sometimes bleak world is hope. Stuck with less-than-stellar quarterback performances the last three seasons, Bradford offers the Rams something they’ve missed for a while: spotless dental work.

Er, I mean promise. We’ll see how well it all pans out this coming season, but I’m fairly certain the Rams fans have a (tempered) measure of hope for the coming seasons. Bradford missed almost all of last year with a shoulder injury that required surgery, so the first time he takes a big hit, the city will hold its collective breath. This off-season, however, he has been sharp, and his learning rate is impressive.

It was first announced that A.J. Feeley would be the starter at the beginning of the season, due to his experience and knowledge of the offensive system. Feeley played for Philadelphia for four seasons and is familiar with head coach Steve Spagnuolo and offensive coordinator Pat Shurmur. With Bradford’s recent surge, however, he’s going to be giving Feeley a real challenge for the spot.

Oh, and Keith Null‘s still around. 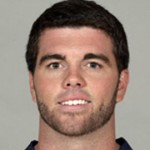 Before the Rams drop Sam into the fire, though, they want to make sure their offensive line won’t spontaneously explode and leave him like a deer in headlights. 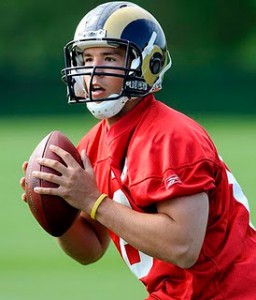 If the line can play to its potential and remain relatively injury-free, it could actually be one of the strengths of the team. Jason Smith, the number two pick last year, has demonstrated potential and a capacity to learn, but he’s been nagged by injuries more than an old man and his woman. The Rams got a real steal when they were able to pick up Roger Saffold in the second round this year. Saffold was projected to be a first-round pick, and he’s demonstrated enough potential that the Rams have been using him at left tackle while Smith heals. Jason Brown and Jacob Bell are also very solid in protection. Adam Goldberg’s been with the team for four years and has experience in the system.

Let’s face it: when other teams played the Rams last year, the one player they focused on stopping was Steven Jackson. If the Rams were a team of lightning rods, Jackson’s rod was the only rod the other teams hit because it’s so much bigger than everyone else’s.

God, that came out awful.

It’s a harsh reality, though Steven’s a star on a team that lacked a supporting cast. He finished second in the league in rushing last year, gaining 1,416 yards on 324 carries. He only got four touchdowns, all of which came in the second half of the season. He’s had a few injuries the last couple of seasons, but he’s a mountain of a man, and he’s only 27, so he hopefully has a couple of solid seasons of production left. He also caught 51 passes for another 322 yards, giving him a total of 1,738 all-purpose yards.

Behind him is Kenneth Darby, a fourth-year veteran who’s actually averaged 4.9 yards per carry in his career, an excellent average (Steven Jackson’s career average is 4.3). The problem is, he’s only carried the ball 61 times in his career, including 27 times last year. He’s a smaller back than either Jackson or Chris Ogbannaya (though who isn’t smaller than Jackson?), so the question has yet to be seen how much of a burden he can shoulder.

Ogbannaya is a second-year back out of Texas who showed some potential in very limited work last year, gaining 50 yards on 11 carries. Look for Ogbannaya to get more work this season, as he’s a little closer to Steven in terms of build and has impressed the coaches in practice thus far.

Undoubtedly Mike Karney played a big role in giving Steven room to run last year. Since the release of Madison Hedgecock, Jackson had struggled to find adequate blocking until Karney signed as a free agent from the Saints. Karney’s impact on the offense last year was noticeable, as Jackson’s averages increased a bit from the two years he lacked a true fullback.

Here’s where the Rams offense really starts to deteriorate. The Rams lack a solid tight end who can not only block but catch the ball consistently. The starter last year, Randy McMichael, was at times erratic in his blocking and catching and was released this offseason.

He was also the team’s third-leading receiver, with 34 catches for 332 yards and a touchdown. The others who played, Billy Bajema and Daniel Fells, performed passably, but Bajema was better for his blocking while Fells was a stronger receiver (21 receptions for 273 yards and 3 TD). The Rams truly need one tight end who can perform both on a high level. The Rams drafted a couple of tight ends in the most recent draft, Michael Hoomanawanui and Fendi Onobun, so perhaps one of them can step up and take over.

This position has the potential to be either a pleasant surprise or an Achilles heel. Last year the receiving corps was, at best, thin. Some of this was due to a dearth of talent, but a lot of it had to do with the health of the receivers, whose legs and knees suffered through more twists and turns than a season of 24.

The two receivers who will likely get the bulk of the receptions are Laurent Robinson, who demonstrated promise (13 receptions, 167 yards, 1 TD) before breaking his leg in the third game, and Donnie Avery, the top receiver last year (47 receptions, 589 yards, 5 TD) but was also injury-plagued.

The Rams did draft a receiver that was an absolute stud in college, Mardy Gilyard. He doesn’t have the top-end speed Avery does, but he’s quick off the line and has excellent hands. He was possibly my favorite draft pick by the Rams

Danny Amendola will also most likely make the team, but that’s more because of his special teams acumen than for his receiving skills. He took over as the chief returner last year and led the league in return yards, although that’s probably because the Rams’ opponents were kicking off so much after scoring.

After that, the rest of the receivers is very much up in the air. Dominique Curry, Brooks Foster, Brandon Gibson, Jordan Kent, and Brandon McRae are all on the roster and trying to gain one of the remaining spots.

Technically these guys are more special teams, but they were on the field about as much as the regular offense (heyoooo!).

Josh Brown has done a good job after coming to St. Louis to replace Jeff “Money” Wilkins. He went 19 for 24 for field goals last year and made all 16 of his PAT. Rumor has it he strengthens his legs in the offseason by kicking stray dogs. 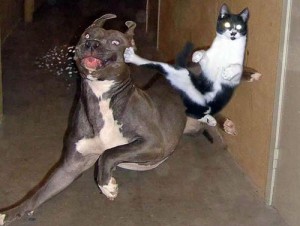 A rare glimpse into Josh Brown's off-season training regimen. He looks smaller without the pads.

Donnie Jones was, in my insightful and perpetually correct opinion, a Pro-Bowl punter last year. He did a tremendous job of giving the defense solid field position and the hang time of his punts were sufficient enough that returners only averaged 6.3 yards per punt.

Most importantly, he didn’t shank very many balls. Or people. Because that would be wrong.

So to recap, this offense could be good or bad, or it could be average. A lot is going to depend on the offensive line staying healthy and the wide receivers stepping up their game. There are a few givens, though.  Steven Jackson will get 1000 yards again. Bradford will take over as starter by mid-season. The offense should make strides and improve on last year. This most likely won’t be a second coming of the Greatest Show on Turf, but it should be a stepping stone toward a better future.