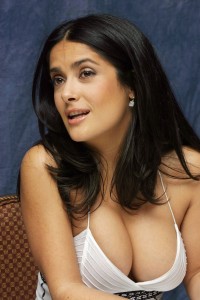 There is a good and bad to every story.  I always like to start with the good.  My hope is that the good news will still be lingering in your head as I proceed to give you the bad.

The beautiful Salma Hayek is being eyed by Sony (they aren’t the only ones eyeing her) to co-star in their untitled MMA fighting movie.  Salma currently has two films in the works.  The first being The Driver followed by her voicing the character Kitty in Puss in Boots.

The bad news is that Kevin James would be playing the MMA fighter.  To see that is a little bit of a stretch is an understatement, but this could be a comedic gold mine….but probably not.  This is all we know about the film so far: “It’s about a physics teacher whose school is facing cutbacks. In order to save the music teacher’s job, James moonlights as an MMA fighter.”

Oh yeah, Salma Hayek is in it.  Great news.

Does this news excite you at all?  Are you a Kevin James fan?  Let us know in the comments below.