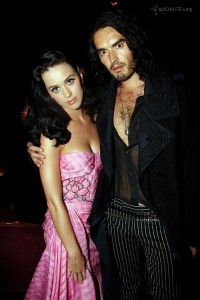 Well that was quick! Comedian Russell Brand (Forgetting Sarah Marshall) and singer Katy Perry (who kissed a girl and liked it) started dating early last fall according to the tabloids, which means it could have been going on for months before or just three weeks ago. Well, it appears they are now engaged. Told you that was quick! Although, that is the way things go in Hollywood.

Now there has been no “official” announcement, but Russell Brand was quoted as saying “It’s true. Much love.” Which I would take to be official, but apparently when you have a publicist who does stuff for you, only true stuff can come out of their mouths.

Apparently Brand has already been introduced to Perry’s religious parents.  How do you think that went? “Well, ‘Ello! I’m Russell Brand I’ve been getting in your daughters knickers and doing some blow off of her stomach!” Ok, so maybe that is a bit exaggerated, but that is how I like to imagine it went.  How religious can a girls parents be if they have a daughter that sings about her kissing other girls? Well, it certainly has changed my experience…..