‘She’s Out of My League’ Trailer starring Jay Baruchel 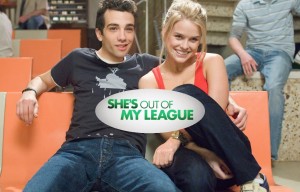 Is this going to be the year of Jay Baruchel? It sure seems like it with roles in How to Train Your Dragon and Sorcerer’s Apprentice he has the chance to be another person from the Apatow set to break out. Even though She’s Out of My League looks to be a run of the mill comedy, it looks like it has some great moments. Not only does it have some great moments, but a fantastic cast including up and comers including Mike Vogel, T.J. Miller, Krysten Ritter, and Jasika Nicole.  It seems that most generic comedy trailers these days make me want to claw my eyeballs out, and this one I found pleasantly funny. So, She’s Out of My League has now jumped up the list to one of my anticipated March releases. Let’s hope that Jay Baruchel can finally sell his everyman act and join the rest of his buddies on the A-List.

In the film, Jay Baruchel plays Kirk, an average Joe who can’t believe his luck. Though he’s stuck in a seemingly dead-end job as an airport security agent, against all odds Molly (Alice Eve), a successful and outrageously gorgeous babe falls for him. Kirk is stunned. So are his friends, his family and even his ex-girlfriend. Now he has to figure out how to make the relationship work, even though he’s the first to admit “She’s Out of My League.”